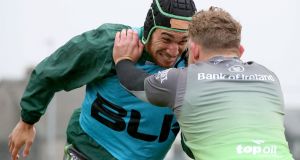 Mayo native Dave Heffernan will captain a strong looking Connacht XV as they host Pro14 champions Leinster in the first interpro of the season at the Sportsground on Saturday afternoon.

Heffernan takes over the captaincy from Jarrad Butler who is ruled out through injury. Heffernan’s inclusion at hooker sees him continue as part of a front trio that includes props Denis Buckley and Finlay Bealham.

Butler’s replacement at openside Colby Fainga’a, makes his first start for Connacht who along with lock Ultan Dillane are the only changes to the team that beat Scarlets last weekend. Fainga’a comes into a back row alongside blindside Sean O’Brien and Robin Copeland at number eight.

In the second row Dillane’s inclusion sees him for a familiar partnership with Quinn Roux.

Among the backs, Kieran Marmion and Jack Carty continue the half-back partnership, as do Bundee Aki and Tom Farrell in midfield.

Wingers Matt Healy and Cian Kelleher are also retained, as is Tiernan O’Halloran at full back.

Leinster head coach Leo Cullen has brought Seán O’Brien back into his matchday squad, while Rob Kearney comes in to take the number 15 jersey.

Jordan Larmour moves to the right wing after playing at fullback against Edinburgh last weekend. James Lowe continues on the left wing.

Joe Tomane partners Garry Ringrose in the centre for the first time with Luke McGrath and captain Johnny Sexton the halfback pairing.

Cian Healy, Seán Cronin and Tadhg Furlong are selected in the front row.

Meath’s Devin Toner moves into third on the all-time Leinster appearance list, he’ll make his 221st appearance in blue on Saturday, and is joined by Australian international Scott Fardy in the secondrow.

Rhys Ruddock, Josh van der Flier and Jack Conan complete the pack, with O’Brien in line for his first game since last April.

Connacht head coach Andy Friend says the match will be a massive occasion for their supporters: “We were really happy with the win against Scarlets last weekend and that needs to become our baseline and the standard that we have to meet consistently. Leinster are an outstanding side and deserving European and Pro14 Champions so it’s a huge challenge. We will need to raise our standards another notch if we are to compete with them. So that’s the challenge and we are really looking forward to it.

“The supporters have been fantastic so far this season and the players have really responded to their support. The Sportsground will be packed and even with our additional terracing it will be a sell-out. That is hugely encouraging. The people of the province are behind us and we want to deliver a performance for them on Saturday.”