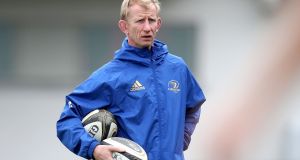 Leinster head coach Leo Cullen: ‘Players need challenges the whole time, too, and I am not necessarily the best person to challenge them in all areas.’ Photograph: Bryan Keane/Inpho

As the season cranks up in customary fashion with the onset of the interprovincial derbies and then the return to Europe, so Leinster’s opponents will be cranking up their efforts against last season’s dual champions. With that fourth star on their crest they are a more prized scalp than ever.

It’s all a far cry from three seasons ago when, as Leo Cullen recalled this week: “There were a lot of doomsdayers out there. No Pro12 teams qualified for the quarter-finals of that year’s [Champions Cup], we were gone by round four. We were a million miles off and that is a tricky challenge in a post-World Cup year. People talk about the challenge going into a World Cup year, but sometimes the biggest challenge can be after a World Cup, because you don’t get access to the players until after the tournament. A couple of teams get very, very heavily affected by that.”

That was also Cullen’s first season as Leinster’s head coach, but as well as his ability to keep his feet firmly rooted to the ground, central to Cullen’s success as a coach is his utter lack of ego.

So it was that he brought Stuart Lancaster on to the ticket two years ago, and this season Felipe Contepomi, albeit they were filling the vacancies created by the departures of Kurt McQuilkin and Girvan Dempsey. “When you are coaching a team, you need to be unbelievably passionate about it,” says Cullen. “So what I want is what is best for the team and if you get that right first, then it becomes pretty easy. Players need challenges the whole time, too, and I am not necessarily the best person to challenge them in all areas.”

So be it if Lancaster was given much of the credit for last season’s success. Cullen was more annoyed at the mere idea that he might have been annoyed by that.

“No,” he stressed. “Why would you even ask that question? I honestly don’t even understand it.”

Coaches, or managers, in other sports, a la José Mourinho, might be, but not Cullen, not even remotely.

“You get the chemistry from meeting people straight away. So with Stuart, it was a good relationship from day one. We had a requirement at the time because of Kurt and his family situation, the way that developed, like it was a tough time, a lot of uncertainty, and Stuart had come off a difficult period as well. It made sense to me at the time.”

“His relationship with Andy Farrell – from a defensive point of view, and understanding systems – and I could see the players and the energy they had from playing that type of system and it was making sure we have that bit of cohesion. I mean the commitment Stuart gives to Leinster, I see it every week, because he gets on a flight from Leeds, comes in Monday morning, flies back midweek, flies back to Dublin again until after the game when he gets home for a day or two.”

“He’s doing that every week. He has to juggle that. So all that I have is respect for the guy. So I was absolutely delighted for him and whatever praise he gets, he deserves it because [of] the impact he has had on us.”

And, likewise, so be it if Cullen was copping the flak three seasons ago.

“Success has many fathers as they say,” he reasons, with a laugh.

Now, having co-opted Contepomi into the coaching team, there are already signs that their former outhalf is further sharpening their attacking game, although Cullen had a hunch Leinster would be drawn in the same pool as Bath, where Dempsey has pitched up.

“Again, we have got someone who knows the inside of the building, and nobody knows it better than Girv. We know the relationship Felipe has with Johnny and what he can add to some of our younger players, the way he sees the game is through a different view to the way Girv would see the game.”

“Girv, as a player, was at the back of the field the whole time versus Felipe has spent the game in the middle. He understands the game, understands Leinster, has spent time in France, picking up what he has there, the different coaches he has worked with, has gone out of the game, come back in, coached in Argentina. Ultimately he has a great rugby brain, is a great character, and the lads have responded well to having him around.”