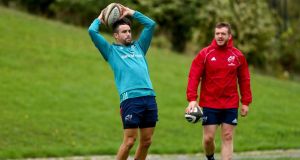 Conor Murray is on course to become the highest paid player in Irish rugby history. That would mean an annual salary of around €800,000 when the national contract and private money, now standard for elite players, is combined.

The 29-year-old’s current deal runs until the 2019 World Cup with his standing in the game putting him in the €1 million bracket for one of the top French clubs.

In the meantime Murray continues a growing trend that has senior Irish players refusing to allow their private medical details to be released into the public domain under data protection rules.

His negotiating position with the IRFU and foreign clubs could possibly be weakened by revealing the full extent of an ongoing neck problem.

Although there is no clear information, the injury is serious enough for Munster to sign former All Blacks scrumhalf Alby Mathewson on a four-month contract.

Munster assistant coach Jerry Flannery did state Monday that Murray’s neck problem is “progressing well” but when Johann van Graan was pressed for a time frame at Wednesday’s European rugby launch, the South African told RTÉ: “Upon [Conor’s] request, I can’t comment on his injury. He’s requested that his information remains confidential. I’ve got to respect that. From the first day we’ve handled his injury accordingly. We take care of all of our players very well I believe.”

Jamie Heaslip became the first high-profile player to insist on personal information being withheld after a back injury before Ireland beat England in March 2017. This eventually led to Heaslip’s retirement, on the recommendation of a surgeon, 12 months later.

“I’ll tell you what happened in the warm-up before England but before I do let me tell you why I kept my medical information private,” Heaslip wrote in the Sports Chronicle. “It’s about data protection.

“When details of my injury were released to the public, after the [Pascal] Pape incident in 2015 [when the French player’s knee cracked three vertebrae], I found out what my rights were. I spoke to our players’ union and put some parameters in place that protects the player, not our employers. The surgeon only has to inform me about my body. Nobody else.”

This suggest Munster and the IRFU might not be fully aware of the details surrounding Murray’s neck issue.

“What happened next really pissed me off,” Heaslip continued. “The messaging from the changing room up to the media got screwed up . . . This hardened my desire to protect my medical information. We are entitled to that.”

Another former Leinster, Ireland and Lions player Luke Fitzgerald stated this week that he’s seen “loads of people giving a very vague description of an injury that actually they had a very definite description” but it was withheld from the media as there was “no value” to the player in full disclosure.

“Because I’ve done it as well,” said Fitzgerald on the Left Wing podcast. “I don’t think it is anyone else’s business, especially with the new GDPR stuff. Clubs need to be really careful about it, I think lots of players who have a bit of clout are going to start saying ‘That’s my medical information, no one is entitled to that bar me.

“It could be to protect themselves from the club,” Fitzgerald continued. “They might not be telling the club this. The club might know there is an injury but not know the exact extent of it . . . They are not in with the doctor unless you want them in with the doctor.”

Murray’s temporary replacement, Mathewson, could feature against Ulster this Saturday at Thomond Park. Despite signing a four-month contract in August, a work permit is only expected to be rubber-stamped this week.

“We hope to have something on that in the next 24 hours,” Van Graan confirmed. “There might be a chance that he will be involved at the weekend, certainly next weekend [against Leinster at the Aviva stadium].

“The information I have is we will have [the work permit] pretty soon.”

Van Graan was adamant the delay before a foreign player can legally play is standard practice, despite the 32-year-old being part of the Munster squad since early September.

“It’s the same every single time,” said Van Graan, “This hasn’t been different to all the other ones, we had it with Arno Botha coming, we don’t have any control of it.”

1 The Offload: Ireland are stuck in no man’s land
2 Munster beat Glasgow to keep their winning streak going
3 Mickey Harte is the new Louth football manager
4 Every kind of wind imaginable was against Tipperary football - and they came through
5 Nicky English: Galway and Waterford face battles with fatigue in All-Ireland semis
Real news has value SUBSCRIBE

Munster beat Glasgow to keep their winning streak going 22:31
Solskjaer says United must be fully focused to avenge Istanbul defeat 22:30
Southampton and Wolves share the spoils at Molineux 22:20
How a visit from his barber helped Kyle Sinckler get back to his best 22:05
Mickey Harte is the new Louth football manager 21:59
Crossword Get access to over 6,000 interactive crosswords