Johnny Sexton cautious in pursuit of a fifth star 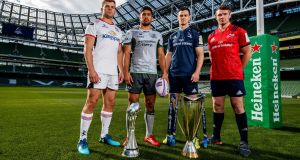 It told you much about Johnny Sexton’s mentality that when he was asked about Leinster defending their Heineken Champions Cup trophy at Wednesday’s tournament launch in the Aviva Stadium, his reference point was not last season’s record-equalling fourth Cup win.

Instead it was the pool campaign of three seasons ago which, he noted, has the same line-up this season save for four-time winners Toulouse replacing Toulon alongside Wasps and Bath.

“We won only one match in the pool then, so this year will be a good barometer of how we’ve progressed,” he ventured of a group that boasts 11 previous European Cup wins between them.

You’d have thought two semi-finals a year on, followed by last season’s historic double, would have represented a reasonable case for progress, but the familiarity with the pool of three seasons ago, when Wasps became only the third team to beat Leinster in Europe at the RDS – and all of them English – acts as a salient warning.

Indeed, this season’s Heineken Champions Cup will kick-off on Friday, October 12th, when Leinster host Wasps at the RDS.

“When I first broke into the Leinster team we had this period of success when we were in a final, or two finals, almost every year for about four years, and we won three [Heineken Cups] in four [years], we won an Amlin, we won a couple of Leagues and you sort of think it’s a little bit easy. But then a couple of coaches leave, a couple of players leave, and suddenly you’re years without success. So you want to make the most of it when things are perceived to be good and you’ve got a good squad.

“We’ve got a good squad this year, but it’s not as good as it was last year, so what’s going to happen if three or four more players leave and get moved to [other] provinces, and suddenly Munster are getting even stronger,” he said, evidently in reference to Joey Carbery and Jordi Murphy relocating to Munster and Ulster on top of Isa Nacewa and Jamie Heaslip retiring.

“So you don’t know where you’re going to be, and you’ve got to make the most of it. That’s what the last 10 years have taught me, and that’s what I try and get across to Jordan Larmour and James Ryan, who come along and win everything in their first season.”

In this, however, he maintained that Stuart Lancaster and Leo Cullen would have a bigger role to play. “I’ve got myself to worry about, and trying to keep Ross [Byrne] out of the team, and all those other things that I’ve got to do to get my performance right.”

Leinster also have the spur of aiming for a fifth star on their jerseys, and so usurping Toulouse in becoming the tournament’s most successful side of all time.

“That’s a motivation for us now, isn’t it? Yea, I think it’s a big driver. We spoke about that when Stuart first came in, and he and Leo painted a picture of what we wanted to look like in a few years’ time, and having five stars would be top of the list.”

“So we had a big motivation to get to that fourth star and match Toulouse, and we matched the top of our domestic league as well with the most wins there,” said Sexton in reference to last season’s fifth title in what is now the Pro14, thus surpassing the Ospreys’ haul of four.

“I don’t think the motivation has changed. I don’t feel any different anyway. I hope the other guys feel the same. It doesn’t look like it. I think if you’d looked at the last few weeks, we looked pretty motivated.”

While hardly one of the game’s shrinking violets, Sexton appears to have assumed more responsibility with the Leinster captaincy

On the day when we were reminded that sitting is the new smoking, the players were quick to stretch after the drawn-out formalities, and particularly so Sexton. You’d wonder if he needed this, all the more so after Laura gave birth to their third child, Sophie, seven weeks ago.

“It’s part of the parcel isn’t it? You don’t get the honour for nothing. Look, to be honest, I don’t find these too difficult. I just try and be as honest as I can, and it’s pretty easy.

“To be honest, I don’t think too much has changed. Right or wrong, I probably thought I was captain when there were times I wasn’t,” he admitted, with smiling understatement. “I probably pi**ed off the captain I played with at times. But I always respected them even though I probably annoyed them, badgered them.

“I remember playing with Leo. At times, I thought we should go for the corner or go for the points and he would have thought otherwise. We would have a word, and once he made his decision I accepted it and did whatever he asked. I have always respected it. There are guys in the environment now that, hopefully, will do the same,” he said, revealing he accepted Scott Fardy’s rationale in kicking for goal against the Dragons.

At least now when he talks to a referee, he can do so legitimately?

“Can you?” he asked with a wry smile. “Last Saturday, I got batted away [by Dan Jones] sometimes.

“Look, I will only go to the ref if I think I’ve seen something that needs to be said. The week before, against the Dragons, with [referee Quinton] Immelman, he had a great game. In hindsight, there were a few things I could have pushed harder. But, he had a great game and rewarded the team that was attacking.”

This is perhaps a work in progress.

1 Gerry Thornley: After 32 weeks the Six Nations is back up for grabs
2 Extremes of sweet and sour for Solskjaer as Man United show signs of revival
3 Stockdale and Ringrose on board with expansive Irish game plan
4 Arsène Wenger: Arsenal was a matter of life and death to me
5 Bennett girding his loins for impossibly unpredictable Vuelta
Real news has value SUBSCRIBE