Connacht have used 33 players during the same period, and lean more heavily on a core group 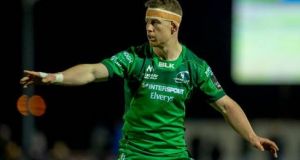 Connacht left wing Matt Healy: he has playing every minute of the team’s four matches this season

The careful husbandry of playing minutes within the four Irish provincial squads is a staple of the Irish player-management programme, one that has drawn envious glances for the most part from those plying their trade outside Ireland in the Guinness Pro14, the French Top 14 and the English Premiership.

On Saturday, Connacht host Leinster at the Sportsground, and irrespective of what teams are selected it’s interesting to note the difference in approach, predicated on squad depth and balancing the books, when it comes to the player-management programme – Leinster have the biggest representation in the Ireland squad, Connacht the smallest – that is already evident after just four matches in the Pro14. Injuries are obviously a factor too.

As a comparison the column examined the players who had racked up the most minutes by position in competitive matches this season for Leinster and Connacht, and as the graphic illustrates in a few cases there is an addendum recognising additional game time in a different position.

Leinster, Champions Cup and Pro14 winners last season, used the most players, 55, of any province in those campaigns, and this season have selected 39 across four matches in which they have won three and lost one, away to the Scarlets.

Nine of Connacht’s players have accumulated 200 or more minutes in one position – that would have been 10 but number eight Paul Boyle lined out as blindside flanker in the opening match of the season against the Glasgow Warriors. Three of them, Healy, Carty and captain, Jarrad Butler, managing in excess of 300, a testament to their fitness and durability. There is no doubt that Carty is maturing nicely as a player, his game management in the victory over the Scarlets last weekend was impressive.

In contrast,. only Leinster number eight Jack Conan has amassed more than 200 minutes in the one position – Jordan Larmour (240) and Fergus McFadden (231) have lined out in more than one – with Lions and Ireland tighthead prop Tadhg Furlong’s 113 minutes the fewest and less than half of his fellow Irish international and Connacht counterpart Finlay Bealham (235).

They are the bald figures but delving beneath the surface reveals that Leinster have given significant game time to three tighthead props, Furlong, Andrew Porter (108) and Michael Bent (99) in rotating the starting and bench roles. That applies right across Leinster in terms of the run-on team.

Only in three positions has Connacht coach Andy Friend been able to share the four-match workload across more than two players in terms of the starting team. The Australian knows that he is facing into a very tricky period with back-to-back inter-provincials against Leinster and Ulster, followed immediately by two rounds of pool matches in the European Challenge Cup. In the context of the season they are hugely important, but player welfare is a primary concern too.

Cullen will also have the spreadsheet out faced by similar game-time issues, his matrix complicated by those players bound for Ireland duty in November, and how they can be integrated on return ahead of the second tranche of Champions Cup fixtures in December.

Sean O’Brien is set to become player number 40 this season when the Leinster team against Connacht is announced. For Connacht, one suspects it might be more for the same personnel.