Andy Friend already looking like a good find for Connacht 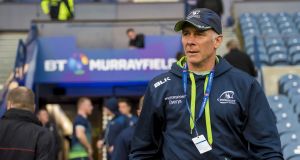 Connacht head coach Andy Friend said Leinster “are the side you want to be playing against and coaching against too because it brings the best out of you”. Photograph: Craig Watson/Inpho

When the Connacht hierarchy decided to dispense with the services of Kieran Keane, after just one season as head coach, it looked a little hasty. It also seemed curiously timed, coming as it did after their record 47-10 win over Leinster in John Muldoon’s farewell game. But, if it’s not too hasty to pass verdict, the decision to appoint Andy Friend already looks vindicated.

Removing Keane had also called into question Connacht’s hiring of a well regarded head coach who, while he could be taciturn, had an extensive CV and had turned down an approach by Warren Gatland to be a part of the Lions’ coaching ticket.

But the Connacht chief executive Willie Ruane and others took the view that the performance against Leinster was a one-off which highlighted the team’s inconsistency. They also deduced that they needed a more outgoing and engaging personality and in the aptly named Friend, they assuredly got that.

There was a palpable buzz after a three-game unbeaten pre-season even before the Pro14 kicked off and this has gradually extended to the re-energised Connacht supporters.

While giving the players encouragement to play, the uber positive Friend has also provided more of a structure for them to operate within. As a result the players appear both clearer in what is required of them and happier.

True, they started off by letting slip a winning position with a slightly unlucky 27-26 defeat at home to Glasgow before beating Zebre at home and then being on the back foot for much of a difficult night in Edinburgh.

But last week’s entertaining and ultimately quite convincing 33-20 win over the Scarlets (14 clean breaks to four, 12 offloads to three, 30 defenders beaten to 10) both raised the bar and, according to Friend, set it.

“That’s what we’ve talked about too. That has got to become our baseline. From there we can only hopefully build on that. We’ve already seen areas from within that game that we weren’t happy with. We’ve talked about those and we’re looking to improve those. That’s our next challenge this weekend – to hopefully see the improvement in those areas.”

As Connacht showed in their three derby wins at home last season, when their intensity and physicality are high, the tempo follows.

“We talk about our energy, and we talk about our ability to get set early and try and beat teams to that, and I thought that opening three minutes set the tone,” said Friend of last week’s game. “There wasn’t a whistle blown in the first 3½ minutes. Both teams had a real good crack at each other but I thought the intensity with which we carried ourselves and the way we worked hard on the ground and looked after our ball, and the way we set early in defence to get in front of them, really set a tone. We knew we were in for a good 77 minutes after that.”

Pulling the strings has been Jack Carty. At 26, and with 108 competitive games to his name, he has served his apprenticeship and seems more confident in his all-round game.

“Jack’s been great, he really has, and I’ve only seen him this year,” said Friend. “So the Jack I’ve seen is an impressive man. He’s growing in confidence with every game. He has an amazing skillset. We’re just trying to give him licence to use that skillset, but he’s been really impressive.”

Before that opening game against Glasgow, Carty had targeted a further improvement in his place-kicking ratio, which had risen to 77 per cent last season, into the 80s. With 18 out of 25 so far in four games, it stands at 78.26 per cent, although in the last two weeks he’s landed nine out of nine.

Carty’s short kicking game has always been inventive, witness Eoin Griffin’s finish against Zebre off Carty’s grubber, while Cian Kelleher might well have had a second try had he attacked Carty’s chipped crosskick rather than wait for it to bounce.

A contributory factor to Connacht enjoying a 74 per cent share of the territory were three one-bounce touch-finders in the first-half in behind Johnny McNicholl, who looked exasperated, to what might soon be called Carty’s corner.

Their new captain, Jarrad Butler, enthused: “He’s making really good decisions and communicating really well as well, especially managing the forwards. There’s nothing more refreshing when you get up from a ruck and they are the ones running backwards and you can just chase them upfield.”

“He’s doing that really well, just controlling the games. He’s spreads the ball around, he’s so comfortable there. It makes the world of difference to the tight-five and backrow. He seems to be getting better and better. It’s exciting.”

Connacht round off their month of champions with tomorrow’s 8,000-plus sell-out against last season’s double winners Leinster. There will be an additional edge after last season’s outcome and the perceived, if not intended, insult of Muldoon converting Connacht’s seventh try, for which he apologised.

Having looked at that game, Friend said: “There was a lot to play for that day; John Muldoon’s last game and yeah, they [Connacht] played a good style of rugby. But that’s last year. You can get hung up and think that is going to happen this weekend. We have got to make it happen. We’re a different team again this year. We have to turn up to the Sportsground on Saturday and make sure that we are better than what we were last weekend.”

“They are a great side. They are the side you want to be playing against and coaching against too because it brings the best out of you. I’ve got a lot of respect for Leinster and the way they play, the players they’ve got, the coaching staff they have got and the history that they have got. We have a chance at having a pop at them on Saturday so we’re pretty excited by that too.”