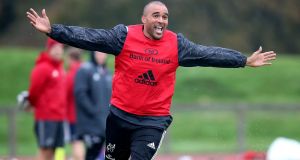 Simon Zebo: It appears everybody loves him and totally understands the reasons for his move to “France”. Photograph: Bryan Keane/Inpho

Way back in 1999 I received a phone call from Mike Ruddock. Rugby had gone professional in 1995, but season 1999/00 was to be the first fully-fledged professional Leinster panel. I had retired two years earlier from an horrific neck injury (chapter four of my book; be patient!) but had slid under the radar for a comeback season with my new club Lansdowne FC.

Ruddock was building from scratch, and had signed some of the greatest rugby players of any era (Brian O’Driscoll, Gordan D’Arcy, Shane Horgan, Denis Hickie etc.) along with great recaptures of Malcolm O’Kelly and others (Gary Halpin) from London.

The problem I had was twofold; although I was back playing I was never the player I had been before injury forced retirement, and having come very, very close at 20 to a senior breakthrough I had since lost, because of injury, all ambition for higher honours – I just wanted to play.

But, secondly, there was the no small measure of my chosen profession: Army officer with the Irish Defence Forces.

This you would imagine would be a foregone positive conclusion from an organisation which provided sporting legends from Major “Ged” O’Dwyer and his wonder horse Limerick Lace in the 1930s (The Aga Khan Cup was annexed five times in succession – from 1935 to 1939 – but as clear favourites for the 1936 Berlin Olympics they were bitterly withdrawn; not aided by taoiseach Éamon de Valera), both Dermot Earlys, through Ciarán Fitzgerald to Michael Carruth.

Not so, as all those legends and many, many more were all professional soldiers performing as elite amateur athletes. So the Army facilitated their training needs and fixtures due to the obvious connection to positive profile, leadership and sense of team.

As Leinster was now offering a professional contract the Army could not facilitate as it had done for many decades. I, therefore, had to apply for leave of absence for the duration of the offered contract.

A no-brainer you’d think. High profile for the Defence Forces and at no cost. In fact, not a penny would it cost as Leinster were to be my paymaster. Again problems; in order for me to qualify for leave of absence I would have to fit into three specific categories.

The details of each are irrelevant, but suffice to say I didn’t qualify, so my application was turned down. Freedom of information wasn’t as open to lieutenants those days, but I was informed that I did not qualify on grounds of service where I was told if Ruddock was happy to wait I’d be available when I was 35!

So here is my point; large organisations require large rules to keep people and cultures in check. I get that, but for me to wait till I was 35 to take the opportunity to represent Leinster and above was ridiculous; especially as there was no cost to the organisation.

Unless, there was a cost. What if another valuable lieutenant, in noting my absence, subsequently applied on the back of my precedent? This, of course, was the reason offered to me: precedent.

My immediate reply: to hell with them as none have been offered a professional rugby contract. Big organisations, big rules, but there are always exceptions worthy of breaking the rules, and to hell with the begrudgers.

So when Simon Zebo’s application to depart for France arrived in the upper echelons of Irish rugby there is no doubt they understood his move. In fact, it appears everybody loves Zebo and totally understands the reasons for his move to “France”. But all have stopped short of committing an outright need for Zebo. I’m convinced the Irish system believes it can survive without Zebo, especially because of precedent.

I say to hell with the other rugby players who may fancy a move for money or culture as there’s not one player in Irish rugby akin to Zebo and his case should stand on its own merits.

Everyone agrees his move is far beyond that of a man lining his pockets; in fact all having acknowledged the obvious financial attractions are at pains to note Zebo is going for far greater altruistic motives; family, culture and playing experience; hence an exception.

But there’s another precedent; Zebo appears to be selected when first choice preferred options were not available; which is always management’s right. I urge you to take a look at Ireland’s performance last autumn against Australia in the Aviva. Then watch what happens when Zebo comes off the bench because of injury. He simply transforms a fixture that was slipping away into a wonderful win.

But what really confuses me is the paradox of persuasion. A key reason spoken of this week for not selecting Zebo, which impacts this autumn, is the obvious disjoint in preparations where residing in France is so eroding on both the individual and Irish squads in the quality of preparation. I get this, and it makes total sense. But Zebo will be in Ireland until the end of the season; in the Irish system and ready and clearly willing to take part. So why not have him in the Irish squad until then? With a review? Or is retaliation first the best option?

Finally, this autumn there is an opportunity for Ireland’s style and performance to evolve at an appropriate pace in preparation for the upcoming hurdles of Six Nations and beyond.

I’m convinced, along with all the obvious building blocks of RWC-ready players, that transition is where Ireland can evolve most. As noted over previous weeks, transition being the act of adjustment when you either gain or concede a turnover, where Ulster are struggling, not so Leinster.

Certain players are showing themselves to be brilliant at maximising same, but the best in Ireland is without doubt Zebo. Ireland need him, and to hell with the rest!

PS. Mike Ruddock got me out in the end.