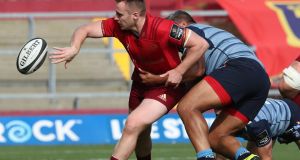 Munster’s Rory Scannell is tackled by Nick Williams of Cardiff at the Guinness PRO14 in Thomond Park, Limerick in September. Photograph: Billy Stickland/Inpho

My first live match of the season was a cracking 45-26 try-fest when Old Crescent entertained Barnhall, and it was at another enjoyable one last Saturday in Thomond Park, when Munster convincingly defeated Cardiff, where I began contrasting and comparing both matches. Layered on top is the last schools’ rugby match I attended.

What’s immediately obvious in how Munster played is their version of the 1,3,3,1 formation. When functioning, all sorts of options can be derived from same. That said, there are two key points of the formation. Have the executioners understanding of the varied options as they unfold, and have they the skill-set to execute in order to expose quirks in the defence? Or, are they simply going through the motions of the formation?

Quite a mindful, but I was also conscious of the wonderful touch from Garryowen to build a U-11 rugby festival in Neville Furlong’s name, which brings the really “meaningful” reaction to my piece on club versus school into mind. Judging by the many emails I’ve received from across the country, there’s huge anger at the perceived school power, such as, “Why do six schools dictate to 64 clubs?” Are all the above connected? In short, yes.

Many times Munster employed second row Billy Holland as first receiver in his specific pod. As the opposition defence approached he would swivel-pass out the back to a second line of attack, typically a back. There are many reasons for this approach, chief amongst them being to create space somewhere by placing indecision in the onrushing defence.

A version of this pod-pullback that worked brilliantly was the lead-up to JJ Hanrahan’s first try on 55min 14sec, where Rory Scannell made an outrageous run up the heart of the Cardiff defence. Big Nick Williams’s fresh air tackle is an embarrassing aspect to Cardiff’s appalling defence of Scannell, but the Munster centre did brilliantly in carrying in both hands, hunting for weak shoulders whilst keeping his eyes up seeking out a Munster support runner for the loveliest of offloads on to Hanrahan for the try. But where did the space come from?

After good ball-carrying down the blindside, Munster hooker Niall Scannell lined up as first receiver with a difference to Holland. He looked like he was going to attack the defensive line, his shoulders were square and he carried in both hands. The picture he gave Cardiff and more specifically their loosehead prop Bradley Thyer was that he was on a charge. Thyer was forced into a tackle where, on taking contact, Scannell then chose to feed his second line of attack – in this case Hanrahan.

Nice to have a “second” outhalf on the pitch, as Ian Keatley was in the previous ruck. But either side of Thyer were George Earle and Kieron Assiratti. Prop Assiratti is especially important to read as he turned his shoulders in, biting on Scannell, creating lateral space to exploit. Option? Attack the shoulder turn.

Holland then ran a hard line where he was more valuable a threat as a player looking to get the ball than actually getting it by providing huge value to the next play. Feeding off Holland’s decoy was Rory Scannell in Munster’s now third line of attack. His brother Niall and Holland had sold well.

It’s great to have a second and third wave of attack and better still if they are deep, but are these players reading the defence? If they are deep but flat amongst themselves they’ll render the play ineffective. There are so many minor decisions inherent in all this which that first ball receiver (Billy Holland et al) needs to read; when to hit the line to fix multiple defenders; when to pass and, crucially, where there’s an Assiratti, where to pass in order to expose the unlocked space. That ball carrier needs to fix at least one defender and interest a couple more like Assiratti. But it’s only success if the support runners read the space and attack the shoulder turn.

This is where Munster can grow the most; reading those successful outcomes and when to maximise will make life easier. Conor Murray gets it, as can be seen by his beautiful pass to John Ryan for his try. This is no accident as Murray spotted Cardiff were sweating on CJ Stander. Ryan was the only man of many to hit.

Immediately prior to this pass Chris Farrell received off Alex Wootton on the blindside with Tommy O’Donnell and Andrew Conway totally unmarked. Farrell ignored/wasn’t aware of the overlap and took contact. Ryan was to score but Farrell missed the earlier option. Not costly against Cardiff – but in Europe?

All this brings the 1,3,3,1 formation into focus. Are we implementing a structure for the sake of it or are the players in that formation capable of reading subtle defensive frailties and executing accordingly? The All Blacks are so skilled that we have grown to expect Beauden Barrett’s outrageous skills, but hooker Dane Coles and second rows Sam Whitelock and Brodie Retallick get the 1,3,3,1 formation and have the ability to read and execute as well as many international backs. Why is this important?

I will revisit the schools-versus-clubs political debate in coming weeks but I’m already concerned that the 1,3,3,1 formation is creeping into the school system. Earlier and earlier, players are being conditioned into specific roles within the system. The All Blacks’ under age rugby is all skills-based regardless of position, so by the time they get to an international Test match they have the skills to implement any system. Munster implemented the system last Saturday but it was often obvious that the first receiver was going to catch and then swivel to a second line with Cardiff’s defence sliding.

I’m convinced skills should not be the preserve of fancy backs, but all players, regardless of number. I’m also convinced that many forwards (and backs) spend their formative years (school/club) playing the game oblivious to the fullness of the skills required to replicate the Munster system as the All Blacks do regularly.

We must teach our young players to read every defender (shoulder orientation) to recognise the best course of action to expose. So the 1,3,3,1 system is to force defenders like Assiratti into awkward places that can be exposed by a forward ball carrier and then Scannell later in a play. I’m also concerned that giving a prop or a second row a specific role within the 1,3,3,1 early in school/club will extinguish other skills long before they ever had them. Enjoy the Aviva tomorrow and watch out for the forwards peeling back into the 1,3,3,1.