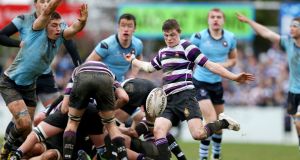 Tim Schmidt has been included in the Ireland squad for the Silicon Valley Sevens tournament in San Jose, California this weekend. The Terenure scrumhalf, and son of Ireland coach Joe, is one of six new players added to the squad that finished second in a Sevens tournament in Spain last weekend.

They face a tough pool including Samoa, England and Canada but will be looking for a progression in performance terms. They will also compete in the Invitational tournament in Dubai at the end of the month.