Are Ulster as ordinary as La Rochelle made them look? 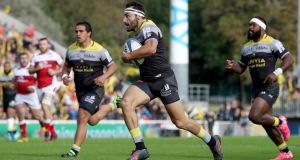 Champions Cup: Jeremy Sinzelle on his way to scoring a try against Ulster. Photograph: Tommy Dickson/Inpho

It was a cracking game, one that pushed Ulster to their limits – way beyond them, in fact. The trouble for Ulster, and indeed their opponents, Leinster, this Saturday at the Kingspan Stadium is understanding where, exactly, Ulster’s limits reside. Are they as ordinary as La Rochelle made them look at times in their Champions Cup match last Sunday?

But even though La Rochelle were wonderful to watch, that does not mean Ulster are doomed against Leinster. That Leinster have been superb in all they’ve done, especially in managing injury, implies they should win with relative ease. That’s way too simplistic, however, as European form can evaporate in domestic derbies.

So where are Ulster weak? Or is it that they are simply overly vulnerable to La Rochelle’s style? It might be worth imagining how Munster or Leinster would have fared in France, because the Ulster headline numbers tell one story – five tries to two is not good – but the remainder are more than acceptable, in that they are on a par with La Rochelle’s. Tackles made, tackles missed, breakdowns won and lost, kicks made, discipline: all tally roughly equally; even attack has a similar hue.

So what’s the difference? What can we learn? First, La Rochelle have won nothing this season, so time and two fronts may yet come against them, but in the meantime, and with one eye on the autumn international series, I want to look at transition and different team approaches.

Many more teams are better at negating the opposition’s transition than building their own, and here is where Ulster struggle: stopping Leinster

I’m convinced the answer is buried in how teams transition when given the opportunity – or, better, how they bully that opportunity open. Few teams are successful at brutally imposing their transition on the opposition. La Rochelle are one, and with 36 of them in a match there’s real value in the transition. Connacht erred in transitioning, and that gave the outrageously gifted fullback Charles Piutau a chance to counter and create the match-winning score for Ulster in Belfast. Many more teams are better at negating the opposition’s transition than building their own, and here is where Ulster struggle: stopping Leinster.

Munster are past masters at stunting opposition transition, especially by understanding cause and effect. Ian Keatley understood this at Thomond Park, where his opposite man, Dan Carter, had all the medals but failed to unlock a positive effect for Racing 92.

Keatley bypassed all the noise of European rugby by dictating what was best for his team – field position in terrible conditions – in the knowledge that, although his pack were facing monsters, they would have the unity of effort to command in the trenches, shutting down any Racing threat wherever it appeared. It was Keatley’s job to keep them going forward. With clever use of the ball, and supported by the outstanding Conor Murray, Munster didn’t have to engage in fancy transitions in terrible conditions.

Ulster  confuse me. What are they? And without Piutau? Regardless of team sheet, we know what Leinster represent

The weather had less impact on the 4G pitch in Scotstoun, so both Glasgow and Leinster were open to choice – which is often a burden. What impresses so much about Leinster is their ability to flick a switch between the trenches and transition. The brilliant Rory O’Loughlin’s second try against Munster at the Aviva is one such example; the lineout-maul try before half-time at Scotstoun is another.

They have evolved into a team that can do both with equal brilliance. Not so Munster, Connacht or Ulster. But it is Ulster who confuse me. What are they? And without Piutau? Regardless of team sheet, we know what Leinster represent. Ditto Munster and Connacht. Connacht’s huge challenge is balancing risk with reward, but they’ve more than enough quality rugby to challenge any comer.

Ulster scored a cracking try against Connacht and again against La Rochelle; that in many ways papers over the cracks of what’s not happening up front. Ulster’s trouble started as they conceded the ball through kicking or turnovers. Victor Vito’s try for La Rochelle was beautiful, with searing runs from Gabriel Lacroix et al, but watch the heads of three Ulster men as Vito crosses the try line. They’d given up.

Not every side is capable of asking Ulster these questions, but their response was abject. When on the ball they lacked accuracy, but when they gave it up they lacked a concerted shutdown. Four of the five La Rochelle tries should not have been scored, and Ulster will be bitterly disappointed. It’s fixable only if Ulster can shut Leinster’s transition down, conceding fewer turnovers and forming an aggressive, unified defensive line with the front five filling the field when they do occur.

Leinster and Munster can dog it out – controlling the ball, the clock and field position – and strike when opportunity appears

This is what is so impressive with Leinster and Munster. They can dog it out – controlling the ball, the clock and field position – and strike when opportunity appears. Munster’s version has a long way to go, and continually relies on battering one out, where Leinster have a far more sophisticated approach. This, of course, is not to be confused with some pseudointellectual plan of attack.

As I’ve said in recent weeks, Leinster are at their best when clutches of eight players play in tandem. The less obvious occasions are when Scott Fardy is running hard lines fixing double defenders, with Tadgh Furlong causing mayhem and Johnny Sexton circling around, reviewing the opposition’s defensive line. That lineout-maul try at Scotstoun is the obvious example, but they can do either. Can Ulster shut down both?

PS: As for Simon Zebo and his move to “Paris” and Ireland’s autumn international squad, I wonder how loved he has really been in the Irish camp. Has he felt irreplaceable to the organisation or simply a valuable go-to man when injuries hit? He certainly deserves our bonne chance et bon voyage, but, deep down, did he feel the love? Either way, is there a better man in Ireland to transition from defence into attack?