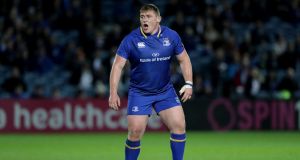 Many things in rugby interest me; currently it’s space. Where is it? And how can a team create then exploit same. With monster Montpellier winger Nemani Nadolo arriving to the RDS on Saturday there’s little doubt about his method. To stop him, jump on his back and steer him with is ears! But what if your team doesn’t have Nadolo or better still Sonny Bill Williams (who can do it all)? What if you are a lonely school or club team? How do you create space?

I received an inquiry about the 1,3,3,1 formation. Understanding this modern formation of how eight forwards spread the field is key to unlocking space and in the Aviva there was a master in Tadhg Furlong. Leinster’s tighthead will rarely ghost through a gap like Joey Carberry did on the way to Rory O’Loughlin’s second try but the value of Furlong (and those around him) in unlocking space is well worth examining. Then contrast that to what Munster are doing.

And to all that, add the new breakdown laws and the formation takes on a new hue. Furlong commits more defensive players to the breakdown/tackle area than Leinster do in supporting him; a force multiplier.

Conversely Munster commit more in supporting their ball carrier than Leinster had to commit. This is especially important when the likes of Bismarck Du Plessis and Antoine Guillamon are loitering as Montpellier’s South African hooker is phenomenal at the breakdown.

The new rucking laws are, in one specific way, favouring defence. Trust the tackler to get the ball down with the remaining 14 defenders in the line. Pending the style of attack the opposition may systematically commit two clearouts meaning three players are tied up – 12 attackers and 14 defenders. Ruck number two repeats the same with 13 defenders facing nine attackers. So the third ball carrier in that third attacking ruck becomes extremely vulnerable as the defence now have superior numbers and will pour in and steal the ball.

The solution is multifaceted (Johnny Sexton’s cross-field kicking) but the primary improvements come from the ball carrier who, regardless of his intentions, (contact, pass before or after contact) must carry with menace and sell the carry. And those running lines must actually run as if they are going to receive. This is where Furlong is superb. O’Loughlin deserves huge credit for his dazzling feet on the way to his first try on 16:27 but watch Furlong’s run; he weaves out to in and then makes a little shift out again to suck in two defenders as he crashes the ball up. Those lines are great, so too the intent but the value later in the game can be seen firstly for Ian Keatley’s try for Munster but especially for O’Loughlin’s second try.

Keatley did extremely well to read the flow of Leinster’s play in intercepting and scoring Munster’s opening try. Peel it back and watch Furlong as he received on 26:24. He has three Leinster men inside and one outside with three Munster defenders. Dave Kilcoyne is the last defender with a momentary gap to Peter O’Mahony. Here is the space but only for a moment. Is Furlong aware? It appears so as this time Furlong does exactly the same as earlier in carrying with intent to the gain line but, instead of taking full on contact, he wisely forces John Ryan into a tackle with Billy Holland and Kilcoyne honey potted and then finds Sexton.

You can argue over Sexton’s line or the pass to Robbie Henshaw but as Kilcoyne stepped in to aid O’Mahony sliding out on Sexton, Munster’s defence had recovered brilliantly to afford Keatley the two-on-two intercept. Leinster didn’t get the ball into the sweet spot of space between Kilcoyne and O’Mahony or convert a potential four-on-three so maybe it was a read or simply a timing issue. But we see it in superb effect for O’Loughlin’s second try.

I implore you to watch it back and pause on 34:03 as Furlong charges off Sexton. Muscle has a memory and watch two Munster defenders plant their heels expecting a massive hit from Furlong; they are now out of the game. O’Mahony, like above, was wider in defence and facing inwards.

But look at Scott Fardy, Joey Carbery and O’Loughhlin – perfect position, perfect depth and all expecting a pass. So it was simply down to Sexton to select the best option and Munster were goosed. Not quite, as all was pending on Fardy. He continued his aggressive run and this time O’Mahony had no choice but to sit on him. But watch the reaction from the sweeping defender Andrew Conway; he too was momentarily fixed. Furlong was brilliant but had Fardy not sold an aggressive run fixing Conway and O’Mahony that moment in time where space was available would have shut.

This takes enormous discipline and reading to transition from a preordained call to play it as you see the defence reactions. Here is where I worked with our club U18s last week. They all know the above but yet were incapable of converting a three-on-two. None actually understand the importance of executing entirely on what you’ve made the defence do and the precision required. They are unfortunately going through the motions in three-on-two games and don’t understand the defence. In two years time they may be professionals. Can we not teach this earlier?

When your left wing is Montpellier’s Nadolo the lazy team approach is to send him ploughing through players but he’d score way more tries playing for Leinster (if selected). But Leinster can force Nadolo into defensive decisions where he is lazy in the read and often left languishing in no-man’s land as attacks flow past him. Montpellier have many strengths but their pace of play even with Ruan Pienaar is at time pedestrian, their accuracy likewise, but at this remove I fancy they don’t have the systematic discipline of the likes of Furlong and Fardy who can create indecision and space by their style of active lines and decision making for others to exploit.

All teams create space but Leinster’s approach appears far less confrontational than Munster, whereas Connacht’s challenge is managing risks associated with their method as seen by their amazing break out in Ravenhill where the brilliance of Ulster’s Charles Piutau and Jacob Stockdale punished the equally brilliant Matt Healy. But that’s for another day!

1 Gerry Thornley: Wild reactions to this Ireland team as fickle as the wind
2 Guardiola’s City legacy hinges on Europe as he faces old foe
3 England and Eddie Jones at the vanguard of rugby’s hybrid era
4 Cian Healy out of remainder of Six Nations
5 Munster were fever-tested when they arrived in Italy
Real news has value SUBSCRIBE