Moment of truth beckons for future of Irish women’s rugby 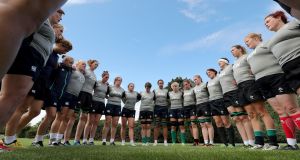 The Ireland women’s rugby team were singularly unimpressed by the IRFU announcement of a six-month part-time coach. Photograph: Dan Sheridan/Inpho

“The successful delivery of the Women’s Rugby World Cup is of huge importance for the future growth of the game in Ireland.” – Kevin Potts, head of Ireland’s 2023 bid, last July.

Solutions are needed from the ground up because the problem stems from the top down.

During John F Kennedy’s speech about secret societies to the American Newspaper Publishers Association in 1961 the US president noted that “an error doesn’t become a mistake until you refuse to correct it”.

This week the IRFU admitted its error, or what they perceived it to be (“causing unintentional concern and confusion”), and promised to embark upon a programme to “help shape the future direction” of women’s rugby in Ireland.

Their solution, when it came at the end of a messy eight days, was obvious: create a lasting strategic plan for women designed by women. So long as the lads accept the recommendations.

Stay tuned for an introduction to the administrative careers of Mary Quinn and Su Carty.

But first. Crisis 101: form a “focused steering committee” with a wide ranging yet vague brief. “Recommendations” may be adopted, or not. And to remove any doubt about the sincerity of it all, put not one but two women in charge. Co-chairs. Finish the “future strategies” paragraph with “from the ground up”.

It may sound like a marketing slogan, a PR smoke-screen, but it should take the focus away from the “recommendations” part.

This is not the IRFU’s first player dispute.

“Remember,” wrote Gordon D’Arcy, “we were them once, before professionalism, through the 1980s and well past the 1995 World Cup. The problems aren’t dissimilar; amateur players straining to be the best they can be, but in need of the necessary support from those charged with safeguarding the game.”

It is, however, the first serious examination of Simon Keogh’s credentials as chief executive of Rugby Players Ireland (RPI).

On October 19th 33 internationals (all females) sent Keogh a letter stating their concerns with the IRFU’s “apparent lack of long-term strategic planning for the Irish women’s programme both domestically and internationally”.

“As a squad we feel this uncertainty and instability is detrimental not only in terms of our ability to perform but also from a player welfare perspective” with the lack of long-term planning “affecting the squad on and off the pitch”.

They finished by requesting “representation to act on our behalf in dealing with our governing body”.

Keogh removed the signatures before passing the letter to IRFU chief executive Philip Browne and then suggested a “collective discussion” begins with RPI representing the women (the remit heretofore was only professional male rugby players).

The IRFU help finance RPI. Not unlike the GAA funding the Gaelic Players Association. This assistance helps them look after players with career advice and other issues.

“It will be part of our job now to make sure [the women] are looked after in the best way possible,” said Johnny Sexton, an RPI board member, when asked about this situation by TV3’s Sinead Kissane on Tuesday.

Lets’ deal with the start, middle and end of this as far as the IRFU is concerned. It’s all there in three @IrishRugby tweets.

This was the equivalent of a man blindfolding himself with a red rag before leaping into a bull ring.

The Clarification (October 20th): “The IRFU regrets any upset that it has caused.” So, almost an apology, followed by: “The IRFU has not downgraded the coaching role in relation to the Ireland Women’s team.”

It was part-time all along. They doubled down by noting Tom Tierney “was not exclusively employed as a full-time Ireland Women’s XVs coach”.

The clarification added: “It is important that, on conclusion of the ongoing review, the IRFU is in a position to appoint staff, including a head coach, full-time if necessary, who can deliver to the long-term strategy identified.”

“If necessary” stood out.

That was Friday. The uproar continued with recently retired players talking to any media outlet that would listen (the Sunday sports sections all but ignored it).

Finally sensing the zeitgeist, the IRFU rolled out Browne.

The Statement (October 24th): “Irish Rugby Football Union CEO Philip Browne wishes to acknowledge the Union’s role in causing unintentional concern and confusion around the future of the women’s game in Ireland.”

We are “fully committed to developing and growing the women’s game in Ireland.” Key words. High performance. Grassroots. From. The. Ground. Up.

Quinn and Carty were presented as a short-term solution to the longest-term problem of them all.

The 2013 Grand Slam was not enough to inspire sustainable change. Beating the Black Ferns at the 2014 World Cup didn’t prompt anyone to plant lasting seeds.

Instead, they set the 15-aside game on this island back years with a focus on a Sevens programme, and a sponsor-rich Olympic dream, in the calamitous three years since those sunny Marcoussis days. Not even the disastrously mismanaged build up to ( as outlined by Ruth O’Reilly in The Irish Times), and utter failure of the 2017 World Cup on home soil provided a harsh enough lesson.

Ireland captain Dr Claire Molloy felt the need to criticise the IRFU on Twitter. “Six Month part time is such a disappointment to hear when our Six Nations opposition excluding Italy have full time coaches. #leftbehind.”

Open revolt followed with the women’s #legacy campaign across club matches last Sunday leading to the IRFU forming a steering committee for women led by women.

Su Carty is an encouraging appointment as co-chair. The IRFU deserve credit for this. Carty will work alongside Mary Quinn, the first and only female on the IRFU committee. But what their remit is, and who will be help them achieve it, and how much scope they truly possess remains unclear.

We’ve been promised answers in due course. Carty knows exactly what needs doing. A former player and current referee she played a key role integrating the IWRFU under the IRFU umbrella in 2008.

“I’ve spent the last seven years helping to elevate the position of women and girls in rugby around the world,” she says on her website about being appointed as the first World Rugby women’s development manager in 2009.

“This is traditionally a sport dominated by men, but working together we made significant breakthroughs, helping women unleash their potential.”

Now, with all that squared away for the time being, the main problem could easily be forgotten – ie finding a new coach just three months out from the Six Nations opener in Toulouse.

What they really need is a proven expert with some time on his hands. Eddie O’Sullivan said a few months ago, when overlooked for even an interview to coach Connacht, that there is no issue with the IRFU despite the fallout when both parties severed his four-year contract two years early in 2008.

The part-time casual role is intended to entice a top coach who can double job. O’Sullivan, a highly decorated career coach, remains exiled from the professional game with Old Belvedere men’s 1st XV.

The IRFU’s “vision 2020” document states: “Does Irish Rugby want to compete with the GAA or soccer or does it want to position itself as a leader that can show other sports how to behave and lead?”

This is a watershed moment for women’s sport in Ireland. The strongest message this past week came from Lynne Cantwell – Ireland’s most capped woman – when she posted a picture of her new born daughter, Scarlett, on Sunday wearing a “legacy” wristband.

“I want my daughter to grow up and be treated with respect whatever sport she plays.”

If this is the IRFU enacting lasting change, a genuine legacy for the women’s game in Ireland, just imagine what their daughters and granddaughters will think of them.