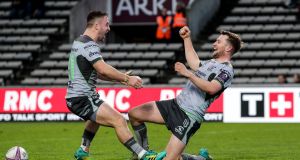 With just three minutes remaining, and Connacht trailing Bordeaux-Begles by a single point, Carty read the play of the tiring French outfit and produced the perfect intercept. Racing in from 30 metres, he dotted down for the winning try and added the conversion to propel Connacht into the last eight.

It ensured Andy Friend’s squad completed their campaign with 22 points, as did Sale, who, with more points from their two meetings, are pool three winners. Thus, as the highest pool runners-up, sixth-seeds Connacht now return to Manchester for a quarter-final clash with Steve Diamond’s side.

“I would have loved a home quarter-final,” admitted Friend. “We got five wins out of six in the Challenge Cup, but we needed to get those early bonus points, so we left ourselves coming second, and in the PRO14 we are equal third, so I think we are on course, we are about right.

“We know what’s coming in Sale, and at the appropriate time we will turn our energy and focus to that, but it’s great to know we are in a quarter-final now.”

In the meantime Friend has a big clash with Cardiff next week, and still has time to continue developing his side into a Champions Cup team.

“We are not the finished product by any stretch. We are yet to put our best game together and when we do . . . You see moments out there and glimpses, but we have to get more accuracy, and if we do, there is no reason why we cannot knock off every team in this competition, whether it is in the Challenge Cup or the PRO14, and that is the belief we have.”

Although Connacht produced three first-half tries, they were never able to shrug off their hosts, who finished the half strongly and took a stranglehold on the game with a 27-19 lead after 50 minutes. It necessitated a huge response from the Irish province, and the entry of some senior personnel in Carty, Caolin Blade and Eoghan Masterson who added some much-needed impetus. Although Matt Healy added his second try on 70 minutes, Connacht left it late to stage the match-winner.

“What a great position to be in, to bring Blade on, he’s full of confidence, comes on and adjusts the game for us. We made the call on Dave Horwitz – he’s been extremely patient in sitting behind Jack [Carty] who is now arguably the third best outhalf in the country.

“Horwitz has come from Australia to sharpen his game, and so it was an opportunity for him, and some aspects of his play were very good.

“If we wanted, we could have started Caolin Blade and Jack Carty, but we knew Jack had played a lot – we actually had Conor Fitzgerald and he injured his back – but the other side is that we needed to look at Stephen Kerins. He’s a young man who has come through the academy structure and hasn’t started a top level game, so what better chance to see him and throw him into this? He will definitely learn from it and he will be given another chance.

“I know people are going to look at us and say ‘why the hell are you putting out a first cap in a quarter-final playoff’ and our message was the quarter-final has come a day earlier because this is it now, but we trust the squad, and there are others who have trained their backsides off.

“So a great finish for us, but we put ourselves under a lot of pressure and that is an area of concern. We’ve talked about it , our three big rocks. One is our tempo and we are playing with tempo; our physicality, and I was really impressed with our tackles, our double hits, the way we are carrying; but out last big rock is our accuracy, and that is the area where we are really letting ourselves down at the moment.

“As we come down to these really important games, we’ve got to make sure we are more accurate, but too many times we released pressure on the opposition through simple errors.”

Despite two early tries from Matt Healy and Quinn Roux, Connacht failed to add to their score till Healy’s break set up Tiernan O’Halloran for the third. But Connacht errors were exploited by Joe Worsley’s Bordeaux, who finished the opening 40 minutes in the ascendancy, leading 20-19. And when French international scrumhalf Baptiste Serin added a third within eight minutes of the restart, they looked more likely than Connacht to progress from the pool.

“I was cranky at half-time because players were lulled into feeling sorry for ourselves and our body language wasn’t good. So half-time the message was ‘show me that, and you are off, we get your body language up, we are a better team, and do not show the opposition you are tired at all, and have belief’. I thought Quinn Roux was outstanding - first time as skipper and he scores a try, he never stopped working.”

With Connacht’s quarter final hopes hanging by a thread, they wrestled a lifeline when they turned over possession and went end-to-end to score their fourth try.

It was the moment of the game, and included great work from Tom Farrell and Dominic Robertson McCoy before Blade played a vital role to set up Matt Healy for the try. Carty’s conversion cut the deficit to a single point. Still a point down and with three minutes remaining, Connacht, finally nailed the win, thanks to Carty’s magical moment, sending the team and some 300 traveling supporters into wild celebrations.

“The fans are always there. The green army marches on, and their voice is heard, “ said Friend. “As soon as things are going well, they break into the Fields of Athenry, so it’s always great to hear them.”