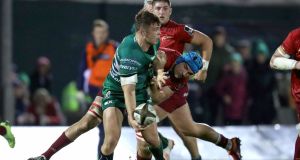 Joe Schmidt has named his 38-man Ireland squad, as his side look to defend their Six Nations crown.

Ireland’s strength-in-depth is such that a number of in-form players have missed out on selection - but Schmidt has found room for three uncapped backs.

The Connacht trio of Caolin Blade, Jack Carty and Tom Farrell have all made the provisional squad for next month’s tournament - on the back of fine domestic form and, in Blade’s case, injury.

Here is a look at the three men who have earned their first call-ups for the Six Nations.

The Ireland centre cupboard is currently overflowing with talent so it is a testament to Tom Farrell’s form that he has been able to force his way into the international reckoning. Having come through the Leinster academy Farrell moved to England in 2016, joining London Irish and then the Bedford Blues. He returned to Ireland with Connacht at the start of 2017, going on to form a fine partnership with Bundee Aki. Farrell has flourished in the 2018-19 season, and has a sleight of hand which belies his hefty 6 foot 3 frame - he currently tops the Pro14 offload charts with 22 and has beaten 37 defenders, the third highest in the league. Farrell is likely to challenge namesake Chris as back-up at 13 for Garry Ringrose.

Ross Byrne delivered a fine performance deputising for Johnny Sexton as Leinster beat Toulouse in the fifth round of the Champions Cup and had looked a safe bet to be named as Schmidt’s third-choice outhalf. However, Jack Carty’s consistency for Connacht this season has seen him usurp his Leinster counterpart in the outhalf pecking order.

This has arguably been a coming of age campaign for Carty, who at 26 now has ownership of the Connacht number 10 jersey. He tops the Pro14 charts for conversions with 24 and is third on penalties with 16 - no mean feat considering he plays his home games in the wild winds of Galway. He has also created seven tries - the second best in the league - highlighting his play-making prowess.

Caolin Blade’s inclusion in the Ireland squad is slightly fortuitous, with a serious injury to Luke McGrath opening the door for selection. However, Blade looks well-equipped to seize his opportunity, especially with question marks over the fitness of John Cooney and Connacht teammate Kieran Marmion.

Academy graduate Blade has played in each of Connacht’s 18 games this season, starting half of them, and is the Pro14’s third-highest passer with 645. Blade’s distribution is sharp, while his pace makes him a constant threat around the fringes. The accuracy of his kicking can be suspect but will only improve training alongside Conor Murray.