Games featuring Ireland, England, New Zealand and Japan will attract the most demand 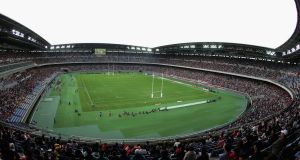 A general view of the International Stadium in Yokohama where Ireland will start their Rugby World Cup campaign against Scotland. Photo: David Rogers/Getty Images

The “huge demand” from Japanese supporters is “expected to crossover” into games not featuring Japan, according to World Rugby.

Ireland’s second Pool A game against the host nation at the Shizuoka Stadium Ecopa on Saturday September 28th (kick-off 8.15am) is effectively sold out. Some tickets may be returned but, as it stands, this appears unlikely. Joe Schmidt’s touring side beat the Brave Blossoms 50-22 at the same 50,889 capacity venue in June 2017.

The pricing for this fixture is the same as quarter-final tickets, starting at €323 for category A with category B (€242), category C (€161 and €40 for children 12 and under) and category D (€81 and €20 for children) the highest demand from the Pool stages. Only tickets for New Zealand Pool games cost the same.

Almost half the 1.8 million tickets for the tournament are already sold with another 200,000 available from Tuesday for punters who were unsuccessful during the initial ballot applications. About 400,000 tickets go on general sale next Saturday, January 19th at 1am Irish time on the official Rugby World Cup ticketing website.

“With extremely limited availability for certain matches,” World Rugby states, “fans are encouraged to use the real-time ticket availability indicator on the ticketing website to give themselves the best opportunity to secure Rugby World Cup 2019 tickets.

“Traffic to the RWC 2019 ticketing website is expected to be extremely high once ticket sales commence. Those unable to secure tickets in the January sales window should be aware that limited quantities of Rugby World Cup 2019 tickets will be periodically made available for sale across 2019 as new ticket inventory becomes available.

“These tickets will be a mixture of seats released from ongoing venue planning and configuration, hand backs from the tournament’s commercial programme and unions, and tickets that have been registered for official resale by fans who can no longer attend matches. All future ticket sales opportunities will be announced in advance, while further details on the Rugby World Cup 2019 Official Resale site will be provided in March 2019.”

A large number of visitors to Japan in September and October will avail of travel agent package deals which include match tickets. However, regarding accommodation, tournament organisers recommend supporters “hunt around” for the best deals as there are plenty of places to stay, especially in Tokyo.

Ticket prices and the distance of Ireland’s opening match against Scotland, on Sunday September 22nd (kick-off 8.45am) until the quarter-finals on October 19th/20th suggests there will be availability at the 72,327 capacity international stadium in Yokohama (also the World Cup venue on November 2nd).

Prices drop significantly for the Russia game on October 3rd (kick-off 11.15am) at the 30,132 capacity Kobe Misaki stadium, starting at €24 up to €121. There is an increase for Ireland’s final group game against Samoa with category A at €161 down to category D at €40.