Champions Cup: how can the provinces secure qualification? 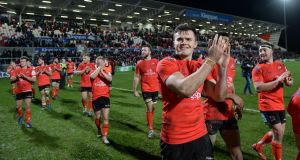 It was a vintage weekend for the Irish provinces in the Heineken Champions Cup, with the three competing sides earning priceless victories in the tournament’s penultimate round of fixtures.

With one round of pool games to go Leinster, Munster and Ulster all have their fate in their own hands.

Another clean sweep next weekend would ensure Ireland have three representatives in the competition’s knockout stages for the first time since the 2013-14 season.

However, the three provinces could still qualify for the quarter-finals even if they were beaten in their final pool fixtures.

Things could get complicated next weekend - here is what Leinster, Munster and Ulster need in order to secure their place in the last eight.

The defending champions turned the tables on Toulouse in fine style on Saturday, avenging their round two defeat in France with an impressive 29-13 victory at the RDS. Leo Cullen’s side now lead Pool One with 20 points - three clear of the French - and are all but through to the quarter-finals. Victory away to Wasps next Sunday would ensure they top the pool, while pole position would also be guaranteed should Bath get an improbable result away to Toulouse.

However, there is a slim possibility Leinster could fail to make it into the quarter-finals, although it would require a freak sequence of results. Should Montpellier beat Edinburgh, with the Scots earning two bonus points - as well as Glasgow winning away to Saracens and Munster, Ulster and Toulouse all winning - then Leinster would be out. Slim indeed.

More pertinently for Leinster, they travel to Coventry looking to secure a home quarter-final, which they will secure with a win over Wasps. A bonus point win would see them finish on 25 points, which could be enough to make them one of the tournament’s top-two seeds, thus guaranteeing a potential home semi-final. However, this would require Saracens (23 points) losing at home to Glasgow or Racing 92 (21 points) not getting a bonus point win at home to the Scarlets.

Munster delivered one of the most complete performances of the Johann van Graan era last Friday night, with the sublime Joey Carbery inspiring his side to a 41-15 win away to Gloucester. Munster are now in control of Pool Two - but Exeter’s 34-12 win at home to Castres on Sunday means there is plenty to play for next weekend.

Munster currently lead the pool on 17 points, with Exeter four behind on 13. The province welcome the Chiefs to Thomond Park on Saturday evening (kickoff 5.30pm, live on Channel 4 and Virgin) knowing a losing bonus point would almost certainly be enough to progress to the quarter-finals. Should Exeter win by more than seven points, and Munster don’t score four tries, then the English Premiership side will top the pool. It is highly unlikely 17 points would be enough for Munster to qualify as runners-up.

Should Munster beat Exeter and Montpellier beat Edinburgh on Friday night - and providing Saracens, Racing 92 and Leinster top their pools - then Van Graan’s side will secure a home quarter-final.

Ulster’s Jacob Stockdale-inspired 26-22 victory over Racing 92 ensures they head into the final weekend in control of their own destiny. Dan McFarland’s side are currently second in Pool Four on 18 points, with Racing leading the way on 21. Ulster travel to play Leicester Tigers knowing a win at Welford Road would guarantee a place in the quarter-finals, although with Racing facing the Scarlets at home in their final pool game it is unlikely they will top the group.

A losing bonus point would also be enough for Ulster to make it into the last-eight, while they could still qualify on 18 points providing roviding two of Toulouse, Exeter or Montpellier are beaten.

If Racing 92 are beaten at home by the Scarlets there is still a chance Ulster could earn a home quarter-final, if they beat Leicester.

Victories for Leinster and Toulouse will see both sides qualify for the quarter-finals, with Bath and Wasps both out of the competition. Toulouse welcome Bath to the Stade Ernest Wallon knowing a bonus point win will be enough for them to top the pool, providing Leinster lose away to Wasps without securing more than one bonus point. Toulouse’s current tally of 17 points could be enough to see them progress, providing Exeter and Montpellier are both beaten, with the latter failing to collect a losing bonus point.

Munster are in pole position and know a win against Exeter at Thomond Park will see them qualify as group winners. The Chiefs arrive in Limerick needing to win by more than seven points, while ensuring the hosts don’t score more than four tries, in order to qualify as pool winners. In the improbable scenario where Exeter win with a bonus point and Munster secure two losing bonus points, then the province would top the group and the Chiefs could qualify as runners-up on 18 points. This, however, would require both Toulouse and Montpellier to lose.

Saracens are the only side whose place in the quarter-finals is mathematically secure, and they will be the tournament’s top seeds if they beat Glasgow Warriors at home in their final pool fixture. If Glasgow (19 points) win away to Saracens (23 points), and the hosts fail to get a bonus point, then they will top the pool, with Saracens then qualifying as runners-up. Glasgow’s 19 points should be enough for them to progress in second place, providing one of Montpellier, Ulster or Toulouse are beaten.

Racing 92 (21 points) lead the pool and are likely to earn a top-two seeding and a potential home semi-final if they win at home to the Scarlets in their final fixture. Ulster can still win the pool if they beat Leicester Tigers away and Racing lose at home to the Welsh - Racing would still be likely to qualify as runners-up if they suffer an unlikely defeat. Ulster’s current tally of 18 points could be enough to see them progress - providing two of Toulouse, Exeter or Montpellier are beaten.

Pool Five will be the first to reach its conclusion on Friday night, and the result of Edinburgh’s clash with Montpellier will have implications elsewhere. The Scots (19 points) lead the pool and victory over Montpellier (16 points)will see them top their group. If Montpellier fail to pick up at least two losing bonus points from their trip to Murrayfield - and Exeter don’t take five points from their clash with Munster - then Ulster’s place in the quarter-finals is guaranteed. If Montpellier beat Edinburgh and deny the Scots a bonus point then they will top the pool.

If teams from the same pool finish on the same number of points they will be separated by their head-to-head records.

Connacht and the Challenge Cup

There is the chance for all four provinces to progress into the knockouts of European competition this weekend, with Connacht also firmly in the mix to reach the last-eight of the Challenge Cup. Andy Friend’s side are currently tied on 17 points with Sale Sharks in Pool Three - with the English Premiership lead thanks to a superior head-to-head record.

The province travel to play Bordeaux-Begles on Saturday, while Sale are expected to beat Perpignan at home Victory for Connacht and an unlikely defeat for Sale would see them progress as pool winners. Should both sides win Connacht will progress as runners-up. If Connacht lose without a bonus point they could still qualify as runners-up, providing two sides out of Northampton Saints, the Ospreys, Bristol and Benetton are beaten this weekend. Should Northampton and Bristol both collect a losing bonus point, they could progress ahead of Connacht thanks to a superior points difference.