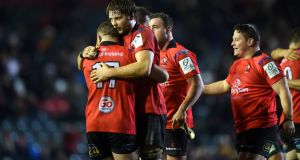 Ulster could have made this simple or complex. While a permutations fetish gripped pre-match conversation, the province knew that a point would be enough for their first European Champions Cup knock-out phase since 2014.

In the end it was simple. No performance, no points from the visitors in the first half and then exploding to life in the second. Ulster will go home not just with the scorching numbers on the scoreboard but the possibility of a meeting with Leinster in the European Champions Cup quarter-final at the Aviva stadium.

The first half was an interminable struggle for Ulster, who failed to find any attacking platform. The scrum was penalised towards the end, which led to Matt Toomua’s try after George Ford threaded through a grubber, while the Ulster lineout was turned over three times in a ragged and unsettling 40 minutes.

The match began with Ben Youngs knocking on and then Ulster prop Marty Moore following in the next play, the fumble setting the tone for a half that shone little light on Ulster’s attacking ability. Moore twice missed passes with Ulster insistent on kicking away possession to a Leicester fullback Jonah Holmes, who was never troubled.

Ulster kicked to touch twice for lineouts inside the Leicester 22 and twice they were turned over. Apart from a line break from Stuart McCloskey on 35 minutes, it was the only time the visitors threatened territorially.

For a side that needed a point to graduate to the knock-out stages, Ulster were shot with error. Unable to generate any sustained possession, it was one of their weakest 40 minutes of the season with Leicester closing the half 10-0, a 32nd-minute penalty from Ford after Moore dived into a ruck, starting the scoring.

Then, what a revival after a huge Manu Tuilagi carry on 49 minutes spread Ulster. In the recycle outhalf Billy Burns slapped the ball and French referee Alexandre Ruiz gave the penalty, which Ford converted for 13-0.

It seemed than Ulster had blown their chance as Leicester inflated with confidence. But maybe Europe is made for such aberrations. Their best attacking move came soon after with Burns lofting a cross field kick left to Nick Timoney. Timoney made ground with blindside Sean Reidy following up but crucially he knocked on just feet from the line.

But that enterprise emboldened Ulster and with replacement John Cooney having a settling effect at scrumhalf, Ulster kicked to touch after a Leicester offside on 58 minutes. Finally the perfect throw and Ulster turned to their maul, Moore, this time with golden hands, peeling off the back for the try and Cooney converting for 13-7.

Just minutes later Ulster again exploded into attack, Burns kicking over the top and Robert Baloucoune racing down the line and under the posts. The comeback took less than six minutes, Cooney converting for 13-14.

That’s where the endgame began, Leicester reacting to the two quick slaps in the face by pressing into Ulster’s 22. But desperate defence under their posts was the call of the day, Rory Best and Jordi Murphy ripping a pivotal turnover feet from their line to a huge roar from the travelling support.

Finally Ulster ran down the clock, a swinging cup match finally falling their way and maybe, just maybe, Leinster up next.

1 Exiled Seán O’Brien not ruling out a third Lions tour
2 PSG break quarter-final curse with stunning injury-time victory
3 Bundini Brown: The man who invented ‘float like a butterfly, sting like a bee’
4 Seán Moran: It won’t take much before cancelling All-Ireland looks like a solution
5 Heroic insanity: When Michael Dunlop raced home in memory of his father
Real news has value SUBSCRIBE