Scarlets likely to suffer the expected backlash in Paris 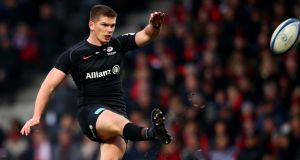 Owen Farrell: England outhalf will be on duty for Saracens against Glasgow Warriors. Photograph: James Crombie/Inpho

As reflected by the Gloucester team – no Danny Cipriani, captain Ben Morgan, Franco Mostert or Billy Twelvetrees with Ed Slater benched – here follows a game of zero consequence. From an Irish perspective, the second-half arrival of Paddy McAllister is worth a glance as the former Ulster loosehead arrives in Galway next season.

Pool 3
Saracens v Glasgow Warriors Allianz Park, 1pm – BT Sport See the difference between Irish and English rugby; Eddie Jones will wince through this game as the spine of the England team charged with toppling the Six Nations champions in Dublin on February 2nd take the field.

Cardiff Blues v Lyon Arms Park, 1pm – BT Sport/beIN Sports Another largely irrelevant contest with Wales coach Warren Gatland, who may just have been reappointed as Lions boss for a third tour, afforded the opportunity to run Gareth Anscombe at fullback with Jarrod Evans getting valuable minutes at fly-half.

Pool 4
Racing 92 v Scarlets La Defense Arena, 3.15pm - beIN Sports/BT Sport Simon Zebo shakes off a dead leg, and tumultuous early part of this week following confirmation of racist abuse coming from the crowd in Belfast, to resume his new-ish role at right wing in a match where Racing must atone for the ineptitude against Ulster.

Finn Russell’s kicking nosedived at the Kingspan Stadium so the Scottish outhalf will be happy to avoid any gales in the Parisians plush indoor arena. A fully stacked side entertain dead duck Scarlets and a bonus point should secure Pool 4, regardless of what happens in Leicester.

But expect a glitzy response from Racing with the wonderful Virimi Vakatawa always worth a look (twice last Saturday he obliterated Ulster’s defence).

Bath’s European campaign was torched by Leinster in December but Todd Blackadder continues to respect the tournament by sending a strong team to the south of France.

With Sam Underhill crocked, Bath have nobody in the English squad so it doesn’t directly impact on the Six Nations but Jonathan Joseph returns from injury in the centre.

Thomas Ramos suffers for his RDS experience as Australian Zach Holmes starts at 10 for Toulouse and, if Wasps catch Leinster at home, the French club can still win the Pool. Unlikely, but to secure qualification Jerome Kaino, Maxime Medard and the rest probably need to manufacture a bonus-point victory.