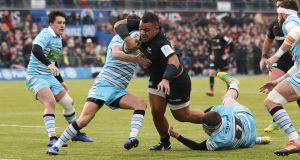 Saracens overcame the late withdrawal of Owen Farrell to advance into the Champions Cup quarter-finals as top seeds by beating Glasgow 38-19 at Allianz park.

Farrell was replaced by Alex Goode at outhalf after being forced to undergo surgery to repair a damaged thumb tendon on Saturday morning that is expected to rule him out for seven to 10 days.

The prognosis means England’s captain will be available for the Six Nations opener against Ireland on February 2nd, although his participation in training until then will be severely limited.

In his absence Saracens completed a perfect qualifying campaign in Pool Three with six wins from as many matches to ensure they will face the bottom seeds – who could be fellow qualifiers Glasgow – in the last eight.

The opening half-hour was lit up by six tries but the avalanche of points dried up thereafter and it was not until 69th minute that the scoreboard was troubled again.

Saracens, who were lifted by the return of skipper Brad Barritt from a head injury, broke the deadlock at 24-19 when man of the match Maro Itoje touched down to secure the bonus point.

Glasgow were hit by the loss of Scotland forwards Jonny Gray and Ryan Wilson to second-half injuries that will concern Gregor Townsend and the Warriors were superb in a feisty European clash despite the lop-sided final scoreline.

Saracens made an ominous start by racing 10-0 ahead, scrumhalf Ben Spencer scoring all the points with a penalty and conversion of his own try.

David Strettle was the architect of the touch down, although he was aided by poor defending as he slipped between Grant Stewart and Adam Hastings before offering Spencer a simple run-in.

Glasgow issued a dynamic response when superb hands from the lineout sent Tommy Seymour galloping over and they surged ahead when a charged down kick fell kindly for Ali Price, who darted across the whitewash.

The frantic pace of scoring continued with Vincent Koch finishing off a lineout drive and then Wilson picked a good line to touch down from short range.

Saracens had lost Strettle to a wrist injury but they reasserted themselves once more when Billy Vunipola blasted over from a five-metre scrum which had been awarded when George Kruis had the ball knocked from his hand just short of the line.

The second half was far cagier as the chances dried up at both ends and the tension threatened to boil over in the 58th minute when mass shoving broke out after the English champions had been shunted backwards at a scrum.

Alex Lozowski was wide with a long-range penalty attempt but the decisive blow finally arrived in the 70th minute when a counter attack developed down the right side for Itoje to cross after input from Will Skelton and Billy Vunipola.

Skelton then forced himself over to further disfigure a scoreline that was harsh on Glasgow.