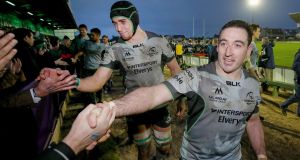 Somewhat “bizarrely” Connacht have given themselves a real chance of qualifying for the European Challenge Cup quarter-finals after a first win over English visitors Sale at the Sportsgound on Saturday.

Ahead by 17 points after the opening quarter, Connacht with minutes remaining were struggling to defend a two-point lead when they coughed up a penalty on the left 22m line. Yet Sale spurned the kick at goal, opted for touch, and were then penalised for crossing in the ensuing lineout.

Connacht, who survived the error-riddled fixture littered with 29 penalties, join the English outfit at the top of Pool Three, with a final trip to Bordeaux next Saturday.

A bizarre game of rugby, said Connacht coach Andy Friend, who, in his frustration at his players conceding that last penalty, had walked out of the coaches’ box only to discover Sale kicking for touch.

“Surprised, I really was. Because for me that’s last-chance saloon. You’ve got a crack at it, you’ve got international players there, probably all kicking at about 80 per cent. That’s a pretty good roll of the dice. But they went to the corner, and a similar penalty that went against us in the first half went against them.”

Minutes before the final drama Connacht looked in control, winning a penalty on half way. Instead they failed to control possession in the lineout. It was another big moment in Connacht’s litany of learnings.

“But we lost it. So they are the moments we have to look at because in big games – and we want to be a team that gets into the Champions Cup – in a Champions Cup game you give that opportunity to an opposition and you are gone. Today we got away with it.

“We are a side that want to get into those play-offs in this Challenge Cup, but also want to be looking for Champions Cup, and they are learnings, and we have to be better at those.”

Connacht enjoyed the better of the first-half action, with outhalf Jack Carty opening his side’s tally with a 12th minute penalty, before a superb kick from Matt Healy gave the home side territorial control. After forcing a turnover, Bundee Aki drew the defence before slipping the ball to midfield partner Kyle Godwin, who caught the cover with his angled burst, touching down after 20 minutes, with Carty adding the extras.

Carty’s conversion put the home side into a 17-0 lead, but right on the half-time whistle Sale snuck in for a soft try from Chris Ashton after Denny Solomona broke up the right wing.

Influential scrumhalf Faf De Klerk added the conversion, and although missing two kicks at goal in the second half, he put Sale into the lead with a try on 49 minutes, and two rapid-fire penalty kicks.

Replacing Jack Carty who was hit hard with a late tackle, Horwitz struck the 72nd minute penalty that proved just enough to seal a deserved and dogged win over Sale for the first time.

“Probably one of the more frustrating games to watch and to play, but at the end of the day we’ve beaten Sale,” said Friend. “They are a really good side, and came in with good form. I think it will go down as a good win for us.

“It continues to build our belief. I think there is enormous belief of what we can achieve, our systems, and the way we are trying to play. It reinforces that – it’s a brick in the wall, and we will just keep pushing forward.

“Everything now is about getting to the top eight, how we recover after this one, how we prepare for Bordeaux, and how to get that win.”