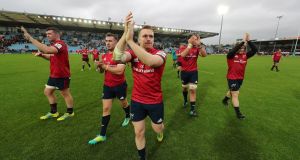 And then there were then 10. Half the Heineken Champions Cup sides remain in contention, and of those only Saracens are through, with all three Irish provinces still very much in the mix. And, as ever, the final round of the pool stages should provide some weekend of drama.

Nine sides are vying for the remaining seven places, with home advantage in all of the quarter-finals also still up for grabs.

Three of the five pools have effectively come down to shoot-outs, most obviously in what looks like the tie of the round at Thomond Park on Saturday (kick-off 5.30pm) when Munster host Exeter in a game that will be shown live on Virgin Media TV and Channel 4, as well as BT Sport.

Completing a three-way Anglo-Irish tete-a-tete before Ireland host England on the opening Six Nations weekend in a fortnight, Ulster play Leicester at Welford Road on Saturday (kick-off 3.15) before Leinster’s game against Wasps in the Ricoh Arena rounds off the weekend on Sunday (kick-off 3.15).

Simply put, Leinster, Munster and Ulster all know that wins will ensure qualification, while in each case defeats run the risk of them being eliminated. Of course it is a little bit more complicated than that. When was it any other way?

It could be only the second time that three Irish provinces reach the knock-out stages of the Heineken Champions Cup. They might be joined by the two Scottish sides too, which would be a first, were Edinburgh and Glasgow to beat Montpellier and Saracens. Even if Glasgow lost that is still a possibility.

Meanwhile, in the European Challenge Cup, despite last week’s win over Sale at the Sportsground, Connacht trail the Sharks on their head-to-head record. Hence, if as expected, Sale record a bonus-point victory at home over winless Perpignan, Connacht cannot top the pool.

However, a win away to Bordeaux Begles would ensure Connacht of a place in the quarter-finals as one of the three best runners-up. Never before have all four provinces advanced to the post-Six Nations, European knock-out stages.

In the event of two sides in the same pool finishing level on points, their ranking will be determined by their two pool meetings, firstly by the match points from the two games, and secondly the best aggregate points difference from the two games.

If two sides from rival pools finish on the same points total, their qualification/ranking will be determined by their points aggregate from the pool stages.

Leinster, along with pool rivals Toulouse, complete the pool stages on Sunday and the champions may already have qualified come kick-off.

However, this will not change their mindset, for they’ll still require a win to secure a prized home quarter-final. Defeat by Wasps could see them overtaken by Toulouse and thus an away quarter-final.

If Saracens or Racing slip up, Leinster may also have a top two ranking in their sights, which would come with the additional carrot of home country advantage in the semi-finals.

Toulouse may also be through come kick-off, but as things stand a bonus-point win at home to Bath would suffice.

Munster know that a win will secure an 18th quarter-final, Exeter that a win, while depriving Munster of a bonus point (or a 5-1 haul), would suffice on the basis of the head-to-head record between the sides.

So a bonus-point defeat, provided they deny Exeter four tries, would be enough for Munster. But this is in essence a straight shoot-out.

Currently the fifth ranked pool leader, a win may not earn Munster a home quarter-final, but an away tie against, most likely, Edinburgh. Were Montpellier to beat Edinburgh on Friday night though, that would open the door to a last eight tie in Thomond Park provided they beat Exeter, and most probably against Montpellier.

Saracens are the only team to have qualified, and victory at home against Glasgow would secure a home quarter-final and, as the top ranked qualifier, home country advantage in the semi-finals should they reach the last four.

After losing 13-3 at home in round one, a win for Glasgow by more than 10 points would see them top the group on head-to-head record. A win of any kind would ensure Glasgow of qualification as one of the three best runners-up, as might a defeat, with or without a bonus point. An Edinburgh win tonight against Montpellier would virtually ensure qualification.

A Racing win at home to the Scarlets will secure Simon Zebo, Donnacha Ryan and the Parisians of qualification and a home quarter-final. A bonus-point win would also ensure a top two seeding and home country advantage were they to reach the semi-finals.

An unlikely Racing slip-up could yet see Ulster top the pool with a win at Leicester which. Most likely Rory Best and his team are playing for one of the three best runners-up slots, and a win on Saturday would ensure qualification.

Victories for Edinburgh and anything less than a bonus-point win for Exeter would ensure Ulster of a quarter-final for the first time in five seasons regardless of their result in Welford Road.

But a Montpellier win on Friday night would most probably leave Ulster needing a win over the Tigers to progress.

Edinburgh are on the threshold of qualifying from the pool stages for only the third time, and first since 2012. Victory at home to Montpellier would ensure as much, and come with a home quarter-final too.

However, a second defeat to Montpellier would see them miss out on first place due to the head-to-head record unless they picked up two bonus points. Even in defeat, they could qualify if any of Ulster, Glasgow or Toulouse lost.

For Montpellier it’s effectively win or bust. A bonus point win would ensure progress, as would a win while denying Edinburgh two bonus points.