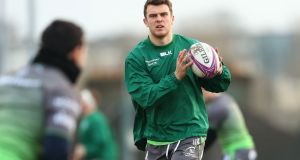 Connacht’s record in Europe would favour the Irish outfit to advance to the quarter-finals after today’s joust with French side Bordeaux-Begles.

Long-time campaigners in the Challenge Cup, Connacht have qualified nine times for the quarter-finals – including in the last four seasons – and a victory today at Stade Chaban-Delmas would represent an important step for Andy Friend’s squad in a bid to maintain a second route to Champions Cup rugby.

It is, however, not a given. Connacht need to win, and the addition of a bonus-point would certainly help in propelling them up the seedings if they want to avoid a possible clash with the top-rated sides, most notably Clermont Auvergne and La Rochelle.

To that end the Connacht coach has been able to include in his squad of 23 four of the five players named in Joe Schmidt’s Ireland squad for the opening two games of the Six Nations, while, also with an eye on next week’s Pro14 meeting with Cardiff, there are 10 changes from last week’s starting XV.

New Ireland squad member Tom Farrell and Bundee Aki are partners in a potent midfield, while both halfbacks, Caolin Blade and Jack Carty, named in the Ireland camp, are on the bench.

As a result Stephen Kerins makes his first start in the number nine jersey, having recovered from an ankle injury in December, and David Horwitz takes over at outhalf.

Lock Quinn Roux, who missed out on inclusion in the Ireland camp, takes over the captaincy from Jarrad Butler, who has travelled as the 24th man, while Finlay Bealham, another not involved in the Ireland squad, anchors the front row with Peter McCabe and Shane Delahunt.

In the back row Eoin McKeon, who has recovered from shoulder injury, is named at number eight, alongside Paul Boyle and openside James Connolly.

Bordeaux, sitting comfortably in seventh place in the Top 14, are expected to make life difficult for Connacht as they prepare for a return to French championship action. They have made eight changes, including a first start at Stade Chaban-Delmas for New Zealander Seta Tamanivalu, while France international Baptiste Serin starts at scrumhalf. Leading the forward charge is flanker Cameron Woki, a lineout expert with a competition-high of six steals.

Connacht have never lost to this French side in three previous fixtures, most notable was the 1997/98 season when Connacht became the first Irish team to win in France, and subsequently qualified for their first European quarter-final. However Andy Friend says all fixtures in France are tough.

“Achieving any win away in France is difficult. French teams pride themselves on their home record and make it difficult for the opposition and we expect Bordeaux to be no different. Having said that, we will be sticking to the approach that has served us well this season and we will be focusing on our own game.”

While a win would mean a number of potential opponents in the last eight, Friend says they need to get the job done first.

“We haven’t really looked at all the different permutations, all we know is we need to get to Bordeaux and do a job. Ideally it would be a bonus-point win, but a win is all we’re focusing on at the minute.”

Connacht, looking to qualify for the 10th time, are up against a French side with nothing to play for, and that may help determine the result, if not the seeding. Having done all the hard work last week when beating Sale for the first time, Connacht will not want to slip up at this stage.