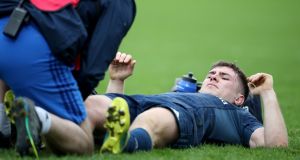 Luke McGrath will miss the Six Nations Championship after picking up a knee injury in Leinster’s Champions Cup victory over Toulouse at the weekend. The 25-year-old scrumhalf suffered ligament damage and the prognosis is that he will be sidelined for eight weeks, a cruel blow for a player in excellent form.

Connacht’s Kieran Marmion (ankle) has said that he will be fit ahead of the Six Nations while the indications are that Ulster’s John Cooney, who withdrew ahead of last weekend’s game against Racing 92, with a back spasm, could be available for the province’s game against the Leicester Tigers. Joe Schmidt will announce the Ireland squad for the Six Nations on Wednesday afternoon.

Jamison Gibson-Park will start Leinster’s final Champions Cup pool match against Wasps at the Ricoh Arena on Sunday (3.15) while former Ireland Under-20 international Hugh O’Sullivan is likely to be included among the replacements. Leinster registered Academy prospect and UCD scrumhalf Patrick Patterson for European competition today.

Jonathan Sexton’s knee tendon issue will preclude him from playing against Wasps. Leinster’s senior coach Stuart Lancaster said last week that the outhalf’s fitness wouldn’t a concern from an Ireland perspective ahead of the opening game against England in the Six Nations on Saturday, February 2nd.

Robbie Henshaw, Devin Toner and Sean O’Brien “will return to full training this week and will be further assessed as the week progress,” but the prognosis is positive. Rob Kearney (quad) and Dan Leavy (calf) are also available for selection prior to Tuesday’s training but they will have to come though the session without any niggles. The cut-off point for proving fitness will be ahead of Wednesday’s training.