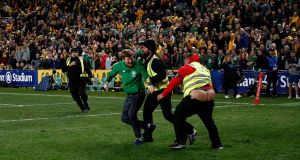 A security guard loses his trousers as he chases down a pitch invader after Ireland’s win over Australia at the Allianz Stadium in Sydney. Photograph: Brook Mitchell/Getty Images 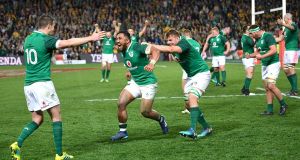 Some are analysts. Some are commentators. It is not difficult to tell the difference between the two.

“Still young enough to sleep with the lights on,” is Jordan Larmour. Bless him and bless Mark Robson, commentator.

Sky Sports. Saturday morning, Australia v Ireland and in between the alliteration of previous matches described as “two titanic tight tussles,” Robson is spilling out more body parts than you had on your full Irish breakfast.

“It’s an elbow right on the epiglottis,” Robson tells us as Jacob Stockdale becomes all MMA breaking out of the Irish defence and cops the Aussie scrumhalf on the, well, epiglottis.

“Poor old Johnny Sexton. His sternum must be like minced meat by now, he gets so many cracks on that part of his anatomy,” he says of Sexton after Australian centre Samu Kerevi respectfully hits him as only a Fijian can. Borderline late. Or maybe as Kerevi would see it, borderline perfect.

In the studio with Shane Horgan and Michael Lynagh, there are more anatomical discussion as Irish lock James Ryan buries himself into another maul of bodies and Peter O’Mahony fails to defy gravity after a mid air tussle with Aussie fullback Israel Folau.

“If he keeps his body together how many caps will he have,” Horgan rhetorically asks of Ryan. Many, many caps is the unspoken answer. But Horgan is correct and ‘if’ is the biggest word in his question. Anything could happen to Ryan and like O’Mahony he could unexpectedly drop from the air and end up crumpled and sore and injured after only 30 minutes.

Michael Lynagh observed that CJ Stander, who had lifted O’Mahony for the high ball, might have, er, em, ah shucks, dropped him. Unkind CJ?

“Does he not have a responsibility to bring that man down safely,” said Lynagh like a NASA official talking about a shuttle re-entry. After watching multiple replays there could be an accusatory finger pointed at the Irish backrow. He may have to sing a song on the team bus for that.

Horgan saw less nastiness in Folau’s act of pulling O’Mahony and causing the foul which earned the Wallaby a yellow card.

“It’s unfortunate and it’s terrible the injury happened,” said the former Irish winger, correctly sympathising with the Irish captain. “But it is almost a consequence of the game.”

A game that was predictably physical, sometimes brutal and never easy. Joe Schmidt afterwards, alluded to the pressure, or, was it the heat, or, maybe it was both the heat and the pressure.

“I think it’s a credit to younger guys, young Jordan Larmour on again and having to work really hard,” said Schmidt.

“Jordi Murphy having to come off the bench. Tadhg Beirne. Those guys having to come into what was a real furnace and they came out the other side and let’s hope that furnace develops the diamonds we need.”

Know what you mean Joe.

Of course commentator Robson, never short of a descriptive flourish waited as we all did as the referee requested the TMO to look at the final pass of the match, which he believed Stockdale had deliberately knocked forward thus ending the final Australian attack of the series.

Had the referee been correct, Ireland might have lost the game and series. And so the replays were replayed and replayed to the background sound of a beating heart thumping around the ground.

They said it was the stadium PA adding drama to the proceedings, but it may well have been a fretting Alan Quinlan.

Finally the answer came back that there was no touch and as the hooter had sounded there was to be no more rugby.

“That was a Hitchcockian climax,” said Robson as we looked to see if crows were gathering in their thousands on the goalposts.