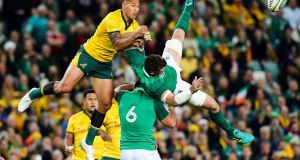 So, Irish rugby’s greatest season ever ends in the grandest of manners. A come-from-behind series win in Australia, the first for 39 years, augments a November clean sweep and a second Grand Slam in 70 years, as well as Leinster’s historic double. Some effort. Some season.

At times, not surprisingly, the Irish players looked to be out on their feet in the last half-hour, and almost playing from memory. But somehow they gallantly, defiantly, grimly held on to a 17-16 lead for over 20 minutes before even finding the wit to earn another three-pointer by Johnny Sexton, immense again and captain for the last 50 minutes.

Even then, akin to the drama which Sexton and others endured in that dramatic endgame to the Lions drawn third test in New Zealand, it required one final conversation between referee Pascal Gaüzère and his TMO Ben Skeen to adjudicate that Jacob Stockdale had not knocked on the game’s final pass by Bernard Foley, so ensuring Ireland of this sleeves-rolled-up win.

It says everything about this game that Ireland had 66 per cent territory and 59 per cent possession in the first half, but just 27 per cent and 35 per cent of same in the second.

As expected, for much of the first 50 minutes or so, Ireland’s performance was founded on plenty of hard straight carrying by the usual go-to men, CJ Stander, James Ryan, Jack Conan (who had a big game, and was credited with 10 carries and 20 tackles) and Bundee Aki, who completely emptied himself.

Conor Murray and Sexton ran the show, and in a rare ould arm wrestle, Rob Kearney did some fine things before giving way, whereupon Jordan Larmour filled in at fullback with elan.

Ireland’s 12-9 interval lead, courtesy of four penalties from four by Sexton to three from three by Foley, was a slim return for some hard yakka. They again had the lion's share of possession, and came within inches of scoring, while generally containing the Wallabies attack in a period which saw both captains and number sevens, Michael Hooper and Peter O’Mahony depart the fray.

As expected, the Irish pack weren’t for letting the Wallabies maul over their line and, indeed, atoned with one of their own to strike the game’s most telling blow - which was also a commentary on its taut nature.

After another late Irish bus arrival, ala Murrayfield last year, Israel Folau, whose aerial strength was the subject of much discussion all week, reclaimed the opening kick-off above Peter O’Mahony, who somersaulted heavily onto the ground, but a few phases later won one of his turnover penalties over the ball. After Niall Scannell’s was pinged for a dummy throw, it needed Kearney to read and gather a Foley chip.

Ireland responded with a trademark set move, with Earls coming across to release Stockdale, before play was brought back for Sekope Kepu’s blatant late hit into Sexton’s back. Did that constitute a ‘king hit’?

Although Adam Coleman pilfered Scannell’s second throw, Kearney beat Folau in the air to Foley’s crosskick, and when Coleman didn’t role away, Sexton opened the scoring.

But Kearney undid his good work, very untypically, by stepping on the touch in-goal line when gathering Beale’s excellent kick, so affording the Wallabies a five metre scrum. Ireland’s midfield drifted up too quickly, and Foley levelled.

A fine Irish attacking passage, featuring good square carries by James Ryan, Tadhg Furlong, O’Mahony, Scannell and Aki, with a neat offload to Henshaw, ended with a David Pocock steal. The Wallabies defensive set came at a cost though, with skipper Hooper limping off heavily when his leg caught in Furlong’s clean out. Pocock won another turnover penalty when McGrath and Ryan couldn’t shift him off the ball.

But after O’Mahony took out Pocock beyond the ball, Stockdale was harshly yellow carded at the behest of the New Zealand TMO, Ben Skeen, for leading with his forearm in fending off a tackle by Nick Phipps, who certainly milked it.

Foley kicked Australia in front, as Kearney continued in severe discomfort after treatment to what seemed a shoulder injury, but as with Cian Healy’s response last week, Ireland rolled up their sleeves in Stockdale’s absence.

Murray assumed the kicking duties with a long-range, angled penalty which was just wide. A 17-phase Irish attack, punctuating by repeated hard, straight carries, ended with Toner knocking on in the tackle from Sexton’s inside pass.

Nonetheless, Aki trucked it up strongly off the ensuing lineout, and after good one-off carries by Henshaw, Ryan and Stander, Pete Samu came through on Murray for Sexton to level. Effectively 3-0 to Ireland with 14 men.

However, O’Mahony took a third heavy fall when lifted into the air by Stander to compete with Folau from another, who did slightly tug him.

O’Mahony was wheeled off on a mobile stretcher and remained on the sidelines with Hooper after failing his HIA, before Folau was binned, again a little harshly, as Stockdale came back on. It also meant Folau would have to be very careful in the air on his return, while Sexton and Pocock assumed the respective captaincies.

From the ensuing penalty to touch, a big maul led to big carries by some of the go-to men - Aki, Stander and Ryan - before Sexton and Henshaw combined to give Stockdale a run. The forwards pummelled the Aussie line before Murray tried to touch down at the base of the posts.

He was prevented from doing so by an alert Adam Coleman who nonetheless was penalised for offside, in which case there was a case for a penalty try instead of the three-pointer which Sexton kicked.

An offside penalty against Murray off a Wallabies maul which was well defended, led to Foley levelling again, and thus 3-all in Folau’s absence. After the hooter went though, Sexton floated a contestable restart for Kearney to chase, and when Samu Kerevi played the ball from Dan Haylett-Petty’s knock-on, Sexton made it 12-9 at the interval.

On the resumption, Sexton floated a superb kick in behind Phipps, and Aki bided his time before latching over the ball. When Phipps was pinged for holding on, Sexton went to the corner, and the pack went to work. A patient, hard-working maul inched to the line, earning a penalty for collapsing.

Scannell’s long throw, contested too, was perfectly timed to the lifting by McGrath and Furlong, and the take at the tail by Jordi Murphy, the remainder peeling around with Stander in the vanguard to steam over the line. It was a try for the pack as much as Stander, although Sexton surprisingly missed the conversion.

Furthermore, Foley kicked to the corner after a scrum penalty for the Wallabies. The Irish pack held out, and withstood some pick-and-jams, before Folau couldn’t hold on to a difficult floated pass, but Murray was in front of Kearney’s kick ahead, and Australia went up the line again.

After 10 phases, Foley’s angled kick found some space in Ireland’s backfield, for Marika Koroibete to gather on an angled run infield, beat Kearney’s tackle and take Sexton’s to score. Foley’s conversion made it a one-point game.

Australian replacement hooker Tolu Latu, again on at half-time, followed up a scything tackle on Kearney with a poach, before Lukhan Tui emptied Aki and Beale forced a spillage from Ryan. The energy levels seemed to be palpably with Australia now.

Another scrum penalty, this time against Healy, led to another passage of attacking, which ended with Henshaw high tackling Folau. A little surprisingly, Australia opted for a shot at goal from wide to the right, and Foley shaved the far post.

The game was in the balance, each side going wide and turning over the ball in the middle third, before Sexton was caught just after releasing his skip pass to Stockdale, who was also tackled into touch.

Larmour, long on for Kearney and dancing confidently from fullback, then made a superb take under pressure from Folau, who conceded a penalty for a one-handed knockdown. The pack mauled, Sexton trucked it up into Pocock’s tackle, and Latu joined in without releasing so conceding a penalty.

Sexton took his time, ignored the booing and nailed a ballsy penalty from the touchline and, taking into account the angle, 40 metres out.

But Folau regained the restart yet again, and Australia had one last throw of the dice. Going wide to the right, and with numbers, Aki hauled down Foley, and his one-handed offload may have brushed Stockdale’s left bicep en route to eluding Kerevi, Samu and Haylett-Petty in drifting over the touchline.

But the TMO, Skeen, deduced that he “must have clear and obvious evidence” that the ball touched Stockdale, which might have led to an Australian penalty and Stockdale incurring a red card, as he’d already been yellow carded. And as the hooter had gone, it was game up for the Wallabies.

As Gaüzère informed the two stand-in captains, Pocock and Sexton, the Irish outhalf turned and raised his arms before the French official had finished his explanation for calling an end to proceedings. Cue wild celebrations amongst the squad and the tens of thousands of Irish fans.

It would be some night in Sydney too, even better than Melbourne.