All in the scrum: Fans left in the dark at Donnybrook 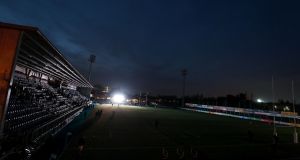 Anyone who was in any doubt about how seriously Ireland took the threat of Wales on Saturday might have watched the Irish warm-up in Lansdowne Road half an hour before the match began.

Both coaches Andy Farrell and Joe Schmidt ensured the pre-match drills were carried out with some degree edge. The Kiwi and the former England centre were snapping commands to the Irish players as they split into two groups to run through offensive and defensive moves, Schmidt occasionally almost stepping into the play to make his voice heard.

That nervous energy was born out when the match started. Johnny Sexton missed his first three kicks (no, nobody could remember the last time that happened) and while Ireland had the lion’s share of the ball they trailed.

In the first 20 minutes Ireland had 71 per cent of possession to 29 per cent for Wales. Despite that dominance of the ball, Ireland were 10-5 down. It was righted by half-time as Ireland led 15-13 but the fast start the coaches had hoped for in the upbeat warm-up never quite materialised, where it counted – on the scoreboard.

Ireland Under-20s left in the dark

Fans who turned up in Donnybrook to support the Ireland Under-20s against Wales on Friday night were left in the dark before the match even began.

The stadium lights went out for around 10 minutes leaving fans and players scuffling around in the night with only the main scoreboard illuminating the grounds.

In fairness to the players, they continued to do their warm up drills on the pitch.

Emergency lighting finally came on and the match proceeded much to the delight of one of the Irish team sponsors Electric Ireland.

4- Johnny Sexton’s missed kicks against Wales. No, nobody could remember the last time the usually flawless kicker missed four in a game.

“I don’t really care” – Warren Gatland when asked how he felt the match between England and Ireland would pan out.

Davies’s try turns out to be no bonus

Gareth Davies, the Welsh scrumhalf wasn’t shy in expressing his views the run in to Saturday’s match. Davies said Wales were coming not just to beat the Ireland on home soil but to earn a bonus point as well.

Buoyed by Warren Gatland naming British and Irish Lions Liam Williams, fullback Leigh Halfpenny and outhalf Dan Biggar back in his starting line-up earlier in the week after all three sat out Wales’s 12-6 loss to England, Davies felt that surge of talent would be enough to bring Wales home.

While he got that theory off to a decent start in scoring Wales first-half try to put them ahead, it was only half right. A bonus point alright but for Ireland.

It seems remarkable that Serge Betson said last week that he didn’t feel France were too far away from becoming a winning side.

Perhaps he is right with a 34-17 win over Italy bridging one of the country’s most fallow periods in its history.

Before last Friday’s match in Marseille France had not won a match for 343 days. Good reason to host a Six Nations match away from the Stade de France for the first time in Stade Velodrome.