If Blues were the ‘Real McCoy’ then what are the Crusaders and, more so, the All Blacks? 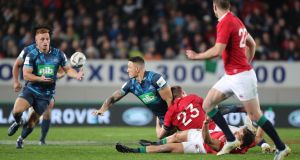 Blues’ Sonny Bill Williams offloads to Ihaia West to set up the winning try in their clash with the Lions at Eden Park. Photo: Peter Meecham/Inpho

“The Blues, this is the Real McCoy, Warren?” the Lions coach was asked on Sky Sports.

“Yeah,” replied Gatland. “Even though they have been bottom of the New Zealand conference table.”

Many people may have been confused over the years about what the ‘Real McCoy’ means. Normally it is a hallmark, a gold standard, a measure of how good a side is.

From the get-go we were asked to suspend reality for the morning match and believe that the bottom of the conference Blues were the ‘Real McCoy.’

“There are nine All Blacks playing tonight,” said Sean ‘Fitzy’ Fitzpatrick, the former All Black captain. “It’s the biggest game of their lives for a lot of these players.

“There are eight All Blacks playing,” said Myles Harrison, five minutes later as the cameras panned towards the pitch and the players. Well, did it really matter?

One thing everyone believed in was that the game was massive. “It’s a massive game,” said Luke Fitzgerald, said ‘Fitzy’, said Will Greenwood three times, said Scott Quinell as Sky’s pacey coverage cut from actual Lions to players and clips of how massive the Blues – played 14, won seven, bottom of the table – were.

“Tana Umaga knows a bit about dumping out the Lions,” ran a short pre-match motivator, with a photo of the former All Black centre and Brian O’Driscoll flashing up on screen. Classy.

So proceeded the Lions’ second match of the series, rain coming down like stair rods in Eden Park, Quinell standing beside his ‘Fan Van’ and pictures of lads with spears trotting around in formation with the Lions in their suits, in their trackkies and in their playing gear casually walking towards them, indifferently looking at them, fearless and calm.

“It’s a top of the ground surface,” Greenwood told us, explaining it wasn’t soft but was wet, before the Blues launched into their pre-game Haka with at least two slicing jerks across their throats to drive home the serious mission of their dance.

And then Sky did what it does well, sum up the situation in language people know and recognise. It would be a ‘big challenge’ and there will be a ‘short turn around’ and the Lions should be ‘prepared for the unexpected’ and they would ‘look for combinations.’

“This is a massive step up from four days ago,” said Harrison, naturally, before the ‘Big Question’ was put to Luke Fitzgerald in the Sky studio.

What is ‘rugby chaos’, Luke was asked. Looking like he had just turned over Leaving Certificate English paper one, which many were around Ireland, Luke did what many of them were doing and stabbed a decent guess at ‘rugby chaos.’

“It’s unstructured play although I’m not fully sure where he is going with that,” said the former Irish Lion of coach Rob Howley’s phrase.

But it arrived on the bang of half time. Rugby chaos, that is.

An easy Blues penalty hits the post and rebounds. Up go a tangle of arms and hands and the ball shoots forwards behind the goal. Down goes a scramble of bodies with Sonny Bill Williams the only smiling man of the lot.

Did a Blues’ hand knock it forward? Was Sonny Bill’s touchdown legit? The answer was no and yes. It was rugby chaos and the Lions now playing a chasing game.

Sonny Bill offloads. Even before he spectacularly did for Ihaia West’s match winning try and it all began to go southern hemisphere for Gatland and his merry band Myles was talking up the defeat.

“This tour will not be defined by this match,” he announced defiantly. Expecting the worst but refusing to allow us believe a beating could possibly dampen our spirits.

But a lifeline was thrown at the end, a lineout.

“One of the pressure throws of his career,” says a perfectly timed Stuart Barnes, Rory Best’s dart hitting bullseye on one of the ‘Real Mc Coy’ players.

A tragicomic end; The Crusaders, the ‘Real, Real McCoys’ unbeaten and on top of the New Zealand Conference, are up next.