Robbie Henshaw savouring trip down under after return 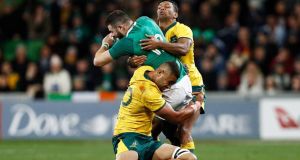 Robbie Henshaw is tackled by Lukhan Tui and Kurtley Beale of the Wallabies during Ireland’s victory at AAMI Park on in Melbourne. Photograph: Daniel Pockett/Getty Images

For Robbie Henshaw, merely completing back-to-back 80-minute games over the first two instalments of Ireland’s three-match series in Australia is a relief. It’s the first time he’s managed the feat for his country since the 2017 Six Nations.

The initial prognosis was that he could be sidelined for three to four months, thus missing the rest of Leinster’s season and potentially missing this tour. In the event, he returned after just 10 weeks to produce, in the circumstances, a remarkable performance in Leinster’s European Champions Cup semi-final win over the Scarlets.

He played the full 80 in the final win over Racing in Bilbao as well, but a knee injury sidelined him for the Pro14 semi-final against Munster and final against the Scarlets. This added to missing the final three games of the Six Nations, culminating in the Grand Slam-clinching win in Twickenham, which he watched from the sidelines.

“You want to be involved in the special days, the memorable ones. It was tough not being there but I got to enjoy the scenes afterwards with the lads [at Twickenham]. It was a mixed year for me in terms of injury, a few niggles along the way, but that’s sport.

“It’s been the first time I’ve had back-to-back injuries along the way.

It was bound to happen, every player goes through a rough patch with these setbacks but it’s definitely about how you come back and shake it off. I suppose [it is a test of] your mindset in terms of how you respond.”

Thankfully, at least he is a good healer, although the first Test in Brisbane was his first game in four weeks.

“There was a little bit of rustiness for the likes of myself coming back in. A lot of guys hadn’t played in a while. That kind of goes out the window after the first ball. I suppose with the travel, getting adjusted to the Aussie time was something that we haven’t done since Chicago.

“We started slow and the game was there for the taking but we were delighted with how we bounced back and really showed how physical a team we can be, how dominant we can be when we’re on the front foot.”

This has earned this uber ambitious Irish squad the chance to end a 39-year wait, thus making a major statement 15 months out from the next World Cup, much like the England Grand Slam team of 2003 did by winning in Australia and New Zealand that summer before adding the World Cup later that year.

“It would be a massive statement for us, we’re currently ranked second in the world and we have to go out there and show the world why we’re second. We have a great chance for us to come here and create history and win a series. I think it’s down to us and our preparation. We showed when things went right for us at the weekend that we are a good force.

“Australia are going to come firing, there’s definitely going to be a massive reaction to how they went last week. We need to build that in camp this week, they’re going to come out hard and we have to match that.”

Intense though this tour may have been, this week and last, Henshaw has caught up with a former Gaelic football team-mate with Westmeath, Ray Connellan, who is now with the ARL team St Kilda.

“Yeah, he’s off for a few days. He’s on a bye week, so he made the most of it. He caught up with me last week as well. He’s happy with how he’s going, he’s with St Kilda. I go way back with Ray, they’d be family friends and I went to the same primary school as him, we grew up in the same area [Coosan], we’d be best mates. We played minor together for Westmeath for a year and senior for Athlone, a good bit of football.”

Playing Aussie Rules was never an option for Henshaw.

“No, never, I never got the chance to have a look. Rugby was always there. But a few lads came across and made a go of it, it was great to see Ray put in the hard work, he’s a serious athlete and it’d be great to see him get some games for St Kilda. He was playing with Westmeath and was one of their standout players, to take an opportunity to go overseas and to experience a new culture, living in a new country he said ‘yeah, absolutely’. It was definitely worth a shot.”

Meeting so many other ex-pats over here has also been a reminder to Henshaw as to how much pride they take in demonstrating their Irishness for a day, “what a small world it is” and what made last Saturday so “special” for him.

It’s another motivating factor on Saturday.

“After Saturday, we can put rugby aside for a couple of weeks. For the week that is in it, and the support we have over here, it is a case where every player is really looking forward to it. It is going to take something special but we are going to have to bring our best, everyone knows that, certainly it is make or break. It is one more game, full hands on deck.”