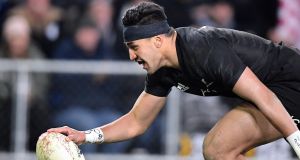 Reiko Ioane scores one of his three second half tries against France. Photograph: Ross Setford/Reuters

Winger Rieko Ioane scored three tries while Damian McKenzie crossed twice in a full display of his attacking abilities as the All Blacks completed a 49-14 victory over France in Dunedin on Saturday that gave them a 3-0 series sweep.

McKenzie’s second try early in the second half gave the world champions a 28-14 lead and the breathing space they needed after the French had played the All Blacks at their own high tempo game for the first 45 minutes.

Fullback Ben Smith and replacement flanker Matt Todd also crossed for the All Blacks who were far more ruthless in the second half where they scored 28 unanswered points.

France scrumhalf Baptiste Serin, who replaced captain Morgan Parra early in the match, and the returning Wesley Fofana scored tries for the visitors, who were again impressive but over-ran by a relentless black wave in the final 30 minutes.

Utility back McKenzie had been given his first opportunity to start at his preferred position of flyhalf and the All Blacks benefited from his pace and instinctive ability to exploit space.

His tactical kicking, however, was wayward and at times put his side under pressure and question marks about his ability to control a test match will continue.

France, who have impressed on their tour without much luck, were combative in the contact, able to pass out of tackles and put support players into space, particularly in the first half.

They also played at a high pace that stretched the world champions’ defence with Serin and Fofana both crossing after counter attacks from deep inside their own territory gave them superb field position.

Their lineout, however, disintegrated under pressure from Scott Barrett, who was also impressive with his defensive work, contact at the breakdown and ball carrying.

For the third successive match the French could also feel hard done by at the hands of the match officials.

After lock Paul Gabrillagues was given a dubious yellow card in the first test and fullback Benjamin Fall sent off in the second, Irish referee John Lacey appeared to impede Serin from attempting a tackle on McKenzie when he scored his first try.

Lacey had been standing in the gap between Serin and his outside defenders, an area that Aaron Smith and McKenzie skilfully exploited.

The referee checked the replay but said he was happy he had not stopped Serin from making a tackle and the All Blacks held their 21-14 advantage into the halftime break.

The All Blacks were much more clinical in the second half and they cut loose after McKenzie’s second try with Ioane scoring all three of his tries in succession.

“We were tight in the first half but in the second half the All Blacks increased the pace of the game and they scored a lot of tries,” Serin said.

“We tried to run the ball a lot as well but we exposed ourselves to the counter attack and that’s something we need to work on.”