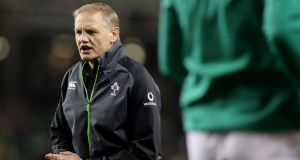 Joe Schmidt’s win ratio is at 70 per cent with Ireland. Photograph: Dan Sheridan/Inpho

“Thanks to a craven media, the Ireland coach had an uncritical assessment in power; his achievements were overblown and his failures ignored. Schmidt may well be the worst coach/selector in Irish rugby history ” – rugby analyst George Hook 2016.

Ireland went on to beat the All Blacks in Chicago’s Soldier Field for the first time less than six months later. We can’t expect crystal balls every time.

The critics of Joe Schmidt may point to the last World Cup in which Ireland were badly beaten in the Cardiff quarter-final by Argentina. Then again no other Ireland coach has ever taken the team beyond that stage in the competition in eight attempts between 1987 and 2015.

In two years’ time in Tokyo, Schmidt will have another opportunity to rectify that omission from his coaching locker.

The last World Cup was an enormous disappointment as much in the method of Argentina’s win as in the result. Schmidt has said it. Rob Kearney, two weeks ago, called it the biggest disappointment of his career.

The reality at this point of his coaching stint with Ireland is that Schmidt has the better winning record of the last four Ireland coaches, including Warren Gatland’s 38 matches, Eddie O’Sullivan, who took charge of the team 78 times and Declan Kidney, whose term lasted for 51 games.

Clearly Schmidt is not finished with Ireland’s win over Argentina last week marking his 50th match in charge. Five games in the Six Nations Championship will take the figure to 55, a summer tour maybe three more to make 58 and then three or four more matches in November 2018 to take his number to over 60.

For now Schmidt’s record looks good in comparison and it coincides with Ireland replacing Australia and moving up the world rankings to third behind the All Blacks and England.

That had been achieved in June but Ireland reclaimed it after the recent clean sweep of South Africa, Fiji and Argentina, currently the fifth, eighth and 10th ranked teams in the world.

Four coaches here are compared going back to 1998 when Warren Gatland first arrived following the resignation of former England coach Brian Ashton after the first round of the 1998 Five Nations Championship.

It takes the team into the beginning of this century when Eddie O’Sullivan became tactician in chief in late 2001. Declan Kidney succeeded O’Sullivan in 2008 (Michael Bradley was an interim coach in 2008 before Kidney and Les Kiss was an interim coach in 2013 before Schmidt) making it almost a 20 year window of how Ireland have performed under the different personalities.

Schmidt was appointed in 2013 and his contract holds until after the 2019 Rugby World Cup in Tokyo. While his win ratio is the highest at 70 per cent, his success against the other top nations is also a standout characteristic of his tenure so far.

While both O’Sullivan and Kidney have a very good record against arch rivals England, with O’Sullivan winning four times and Kidney three times, Schmidt is coming close with two wins under his belt and a Six Nations Championship ahead.

Gatland came in under controversial circumstances and his first match after Ashton left was defeat to an on fire France side. Ireland went on to finish that year’s championship in last place with zero points. None of Gatland’s Ireland teams beat the Springboks, Wallabies or All Blacks.

The reality is whether Ireland will ever have another coach who goes into a seventh year like O’Sullivan, who took charge for 78 matches, is a moot point.

Schmidt could do it depending on what his decision is after 2019. He was appointed in April 2013, so if he continues with Ireland after Tokyo he will surpass O’Sullivan.

Taking the first 50 matches for comparison reasons would exclude Gatland, while there are other comparative differences.

From 2000 onwards the formats changed from a Five Nations competition to a Six Nations event as Italy did not compete prior to that. Italy are now a team that Ireland expect to beat every year.

It’s a snapshot of the work in progress of Schmidt relative to others and no more than that. But the numbers respectfully suggest that he is probably not the worst coach in Irish rugby history.