‘Tough, tough to watch that, they just kept coming wave after wave’ 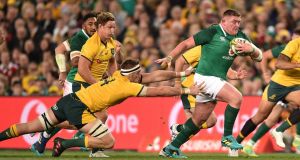 A slightly drained looking Joe Schmidt admitted that the last few minutes of Ireland’s white-knuckle ride to a 20-16 third Test win, and with it a first series win Down Under since 1979, had been uncomfortable to watch.

Ultimately, the game and the series came down to one final call by the TMO Ben Skeen from New Zealand, who not only decreed that there was no clear evidence that Jacob Stockdale had deflected the ball forward, but informed the referee Pascal Gaüzère that, in fact, the hooter had sounded and there was no time for a final lineout to Australia.

Stockale himself was adamant that Bernard Foley’s final pass had not touched him, and so Ireland completed a series win after defending a one-point lead from the 55th minute, and then a four-point lead for the last drawn out Australian attack.

“Tough, tough to watch that,” sighed Schmidt. “They just kept coming wave after wave, I thought they were super in that second half and I thought it was a super effort from our guys to hang on in and keep them out.

“They came in waves, the speed they came on to the ball, it was really hard keep them off our advantage line, so once they started getting that momentum they were even harder to contain.

“It’s a credit to our guys for hanging in there and it is probably a credit to the Wallabies, because I thought they did a fantastic job of carrying incredibly well.”

Asked how it ranked after everything Ireland had achieved this season, Schmidt said: “It’s up there. I think they [Australia] are a super team. To be in their back yard and manage to sneak off with the Lansdowne Trophy is a little bit special for us, especially on the back of a pretty long season.

“It is a credit to players, they dug in just well enough. I’m pretty pleased there is not a game next week – that might have been a bridge too far. But the Wallabies are going in the other direction, they have got fuel in the tank and I think they are building. I’m sure Cheiks [Michael Cheika] is pretty happy with some of what they’re doing, particularly in that second half.”

Not that Cheika was happy with some of the officials’ decisions, maintaining that the Wallabies hadn’t had the rub of the green.

“There’s always a few bounces of the ball that don’t go your way and some that do go your way,” countered Schmidt. “I felt there were probably a couple of things that didn’t go our way as well.

“I guess it’s all about perspective. I know Sir Alex Ferguson says you can have a fantastic preparation but you still need a bit of luck and I wouldn’t certainly put the degree of effort from the players down to luck tonight. When that lass pass goes awry, if it didn’t they might have scored that, and that’s how fine the margin was.”

The bus taking the Irish to the ground had been advised to take a longer route due to a LGBTQI march in downtown Sydney, and à la the 2017 Six Nations opener in Murrayfield, resulted in the players arriving about 15 or 20 minutes late to the Allianz Stadium.

“Yeah, it took just over 13 minutes to get here yesterday and just over 30 today,” said Schmidt, who could now afford to laugh about it. “It’s happened to us before, and I think we kind of got knocked off our stride and went down 21-5 or something at half-time against Scotland a couple of years ago.

“It’s good for the team, I think there are always things that are going to come at you from different sides. Sometimes that sort of thing happens, you have got to be able to take it in your stride.

“Most teams have a real rhythm in how they build to a game, when that gets disrupted it can be a little bit of a distraction. But it’s the first time in the series that we’ve scored the first points. So, we got off to not too bad a start.”

A record crowd of 44,085 at a ground which is to be knocked down at the end of the year and rebuilt over the next three years, was again heavily populated by Irish fans, and as in Melbourne’s AAMI Park, were heavily congregated in the southern stand.

A few excited Irish souls were the worse for some thumping hits by security guards when they sought to celebrate with the players, and one of the many warnings that this country is so keen on displaying reads: “Unauthorized entry to the playing arena is prohibited by Law. Offenders will be prosecuted. Penalty Aus $5,500.” That’s over €3,500.

“I feel that potentially we were a little bit fortuitous and the margins are so fine,” admitted Schmidt. “I didn’t think we were far off in Brisbane either. It’s been a fantastic series. Certainly not too many of the crowd left. Some of them were trying to get a bit closer than they should have. But not too many of them left, and it’s great for the players. They enjoy celebrating those with the crowd who were very animated, whether it was for one team of the other.”

Ireland finish the season ranked only behind the All Blacks, whom they host in November, but next up is a trek to Chicago, where Ireland beat New Zealand in November 2016, and a meeting with Italy.

“Whenever you get back together it’s a slightly different group all the time so you’re not quite in the same rhythm. It would be great to get continuity and it’s one of the luxuries of the Rugby Championship now, that the Wallabies will split for three or four weeks but they’ll then be back together and they will build through that Rugby Championship and be really competitive.

“Boy, they were competitive out there tonight. We probably won’t look too much further ahead than that, Argentina after Italy and then . . . for me personally, the All Blacks is a little bit special because my mum’s such a big fan of the All Blacks.

“It’s always a little bit tenuous. I’m going back to New Zealand for a couple of weeks so I probably won’t get as many of the treats that she cooks just in case I don’t make sure that we’re less than competitive because that’s certainly not going to be the case.

“These guys, they want to win everything they can so that’s going to be a real challenge for us. Then we finish with the USA and they had their first win in a very long time against a Tier 1 [Scotland] side and they’re building pretty well as well.”

“I’ll look at all of that in about three or four weeks.”