Noticeable increase in intensity and physicality proves too much for Australia 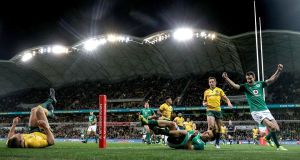 Ah yes, this was more like the second best team in the world all right.

Sometimes, as Andy Farrell ventured, it’s not rocket science. Force-fed the rare taste of defeat, a wounded, motivated Ireland responded by ratcheting up their physicality, and, oddly, save for the first and last two minutes, there was only one winner.

“I think that’s what was lacking last week, we weren’t getting physical,” said Devin Toner after another hugely industrious game.

“We weren’t winning that contact area, but I think this week it was a kind of kick up the arse to be honest. We got in their faces and upped that physicality, so hopefully we’ve another place to go.”

Of course, there was more to it than that, namely the presence of the maestro Johnny Sexton, improvements at scrum time, the breakdown and in the air – with Irish players crowding Kurtley Beale in a bid to affect Israel Folau’s supply lines – and a higher degree of accuracy and ruthlessness, although in this regard, they also have another place to go.

The carriers worked harder to stay on their feet, eking out extra metres and ensuring better ball presentation, and then more efficient clearing out, from numbers one to 23. They also brought more line speed and bigger tackling.

Pocock won a turnover scrum nearing half-time when clearly playing the ball off his feet, and another one at the start of the second, but that was about it. Peter O’Mahony had three turnover penalties of his own, as well as his lineout work, good carries and hands.

Tadhg Furlong was back to his wrecking-ball best, Niall Scannell (brought into the game early on as a carrier) had a very strong night, and the work-rate of CJ Stander and James Ryan was immense.

“He is a machine,” said Toner of Ryan. “People are asking me if he’s learning anything from me. I’m learning stuff from him to be honest. He’s a machine, and two 80 minutes in a row as well. We kind of slagged him a bit at the start of the season for getting injured a bit but he’s shaken off that off and he’s really putting together some class performances.”

Conor Murray and Sexton ran the show, and as ever didn’t shirk the carrying and tackling either. The Wallabies go after the ball in defence, be it intercepts, hits or contesting the ruck. But this comes at a cost, witness taking players out off the ball – a carryover from the first Test. But it’s also testimony to the way Sexton took the ball flat to the line before picking out a choice of well-drilled, hard-working runners.

Conceding a dozen penalties and two yellow cards won’t have amused Schmidt, who was nonetheless entitled to feel aggrieved that the Wallabies incurred just one yellow in conceding 15 penalties, when Marika Koroibete was lucky Rob Kearney landed on his shoulder after spear-tackling him.

“We kind of felt a little bit that it was quite tough,” said Schmidt. “We got the two yellow cards, there were two tap downs [by the Wallabies], one was an overlap for us, that we felt that if one warranted it then maybe the other one does.

“But at the same time, you cannot be cynical in a ruck like that, especially not in the 22. So there are no complaints from us, really,” he said of Jack McGrath’s yellow card.

“But there is a willingness to work harder and to make sure our discipline is as good as it can be. We averaged 7.6 per game in the Six Nations, we have averaged 11 over the two games here and it is not where we want to be.”

McGrath’s 76th minute yellow card, for playing ruck ball while on the ground, was entirely merited. But whereas Paul Williams went to the TMO for this decision, Marius van der Westhuizen pinged Murray for complaining when Tolu Latu committed the same offence a week beforehand. It should never have come to a last roll of the dice from the Wallabies, but Ireland lost the try count 3-2 despite making eight clear line breaks to one.

Having worked a try for Conway, Furlong galloped 30 metres up field but didn’t given the return pass when Garry Ringrose switched to his outside. And after a jet-heeled break by Keith Earls, McGrath had one touchdown ruled out for a double movement, and Earls, salmon-like in the air, and a sidestepping cheetah on the ground, was adjudged to have lost control of the ball after somehow twisting under Folau. Eventually Murray had another try-scoring assist when Furlong crashed over for his first Test try.

“It is easy to say but we just need to finish sometimes,” said Schmidt.

“I felt that we played some really good stuff in that third quarter, and put them under some massive pressure. And they were bleeding back, quite often, on the back of half opportunities, half gaps, sometimes full gaps, like when Keith Earls went through, one when Tadhg went through earlier just before half-time. But to then get something on the back of those is quite tough if a team defend as earnestly as they did.”

Sexton also hooked one penalty, but did land six from seven, ensuring some kind of fitting punishment for the Wallabies’ indiscretions.

In truth, the Wallabies took the only three try-scoring chances they created. Bernard Foley’s drifting run dragged Dan Leavy across field and Stander failed to fill the gap as Kurtley Beale sped through after 83 seconds. They had a penalty try from a maul and another from Taniela Tupou when battering 14-man Ireland in the 78th minute.

Cue one last desperate defensive set. One of these days this Irish team might actually put a good team away convincingly.