Australia 16 Ireland 20: How the game played out

Gavin Cummiskey looks at the key calls, moments and incidents from Ireland’s win in Sydney 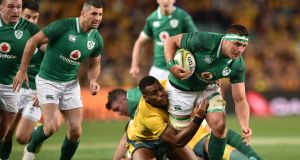 Ireland’s CJ Stander makes one of his 15 carries in Sydney. Photograph: Getty Images

CJ Stander has been Ireland’s best player in 2018. Yes, the rise of phenomenal home-grown St Michael’s boys Dan Leavy and James Ryan has proved pivotal, up there with Johnny Sexton’s magnificence and Conor Murray’s control, but Stander has physically dominated all comers in Paris, Twickenham and Down Under. A truly great Irish backrow who probably doesn’t get the plaudits he deserves as he was born in South Africa, but he’s a vital cog in this Irish engine room (the try and 15 carries for 26 metres won the match as much as Sexton’s penalties).

Honourable mentions: Jack Conan made 20 tackles. Sexton’s ice cold kicking. Bundee Aki was superb. Everyone showed up in defence. Last November Ryan chided the media for comparing him to Paul O’Connell. Forget his age, only 21, he should be Ireland captain at next year’s World Cup (Rory Best will be 36, Peter O’Mahony is too injury prone and see Sexton’s quote below). It’s time.

Moment of the match

So many, but has to be Stander’s try. Niall Scannell found Jordi Murphy at the back of the lineout and Ireland powered over. “Simon Easterby, ” said Joe Schmidt. “That’s his try.” Now, can they do that to the All Blacks? Technique is everything.

Error of the match

Bernard Foley made a few, the late knock on, missing Folau, the last penalty, going to touch not for goal and flinging that injury-time pass into touch. Without Sexton-type composure the Wallabies will never move on and with Quade Cooper still their second best outhalf, Michael Cheika has an unsolvable conundrum.

Maybe it helped but Joe Schmidt’s pre match “anxiety” interview was weird. The late bus - a bugbear of Schmidt after issues en route to Murrayfield in 2017 and on tour of Japan last year - made his pre-game demeanour testy. Afterwards he couldn’t let it go: “It took 13 minutes to get here yesterday. It took over 30 minutes to get here tonight.” Still, look at his CV and marvel. If the All Blacks don’t break the bank and bring him home in 2020 the IRFU should make him the highest paid coach in the world rugby (more than Eddie Jones) with Stuart Lancaster to take over after 2023 (after the Englishman guides the Lions to a series victory in South Africa 2021)!

The penalty against Tolu Latu on 78 minutes was beyond harsh (he couldn’t hear the referee saying “Let it go” and why would he, being perfectly latched over the ball). Sexton’s beautifully struck goal made it a four point game and defence guided them home. Michael Cheika will be deeply unhappy with that call and the “forward pass” by Joe Powell that looked backwards. The officials - especially in the France v New Zealand series (see John Lacey’s gaff to create a try for Damian McKenzie) - have been poor throughout June. Must do better.

“I know you hate me, but you have to talk to me.” Johnny Sexton, with Peter O’Mahony laid out on the turf after the aerial incident with Israel Folau, begins dialogue with referee Pascal Gaüzère.

Benzema strikes late to earn Real Madrid a point at Atlético 17:59
Here is your handy guide to sport on television this week 17:01
Sam Bennett on top again as he takes Paris-Nice first stage 16:55
Fulham consign Liverpool to sixth-straight defeat at Anfield 16:25
Relegation looms for West Brom after Newcastle stalemate 14:14
Crossword Get access to over 6,000 interactive crosswords