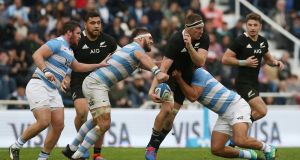 All Blacks coach Steve Hansen will breathe a huge sigh of relief that his final preparations for the Rugby World Cup got off to a winning start, but he would also know there was still plenty of room for improvement over the next two months.

An under-strength All Blacks side, lacking discipline, held on to deny Argentina their first victory over the world champions, with a 20-16 victory in their Rugby Championship clash in Buenos Aires on Saturday.

The All Blacks defence stood out in the second half, while Hansen was also pleased with the efforts of some of the newer members of the team.

“We found a lot of things (out) and most of them were pretty positive and that was pleasing,” Hansen said of a squad that included five debutants and seven others with 10 or less caps.

“We knew we’d be rusty and we were but the young guys we wanted to look at got an opportunity to play in a place like this, which is difficult to play at any time, and most of them put their hands up.”

The side were shorn of several hundred caps of test experience with players from the Canterbury Crusaders, including regular captain Kieran Read and lock Sam Whitelock, being rested ahead of Saturday’s clash against the Springboks in Wellington.

Experienced players like Brodie Retallick, Beauden Barrett and captain Sam Cane showed leadership in the final stages of the game, which Hansen felt would only serve the team well in Japan later this year.

“You take all the leadership out from that Crusaders group ... to have this group go through what they went through, it’s like winning the Lotto,” Hansen added.

The Pumas’ kicking game, a tactic likely to be also utilised by the Springboks, Ireland and England at the global showpiece, put the All Blacks under immense pressure.

Even the normally assured fullback, Ben Smith, had trouble attacking the ball in the air and was beaten to a kick by Emiliano Boffelli close to the line that led to the Pumas’ only try.

The All Blacks also failed to finish off several line breaks, a rarity in international rugby in the modern age with fast defensive patterns, by trying to force a pass or turning the ball over.

“You can’t just snap your fingers and get the end result just like that,” Hansen said.

“At times our accuracy and combinations weren’t quite there (and) it takes time and timing together.

“But we will get better. We’re not going to panic.”