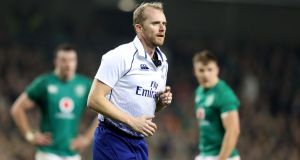 Barnes is a familiar face for the Ireland players, with the English referee most recently taking the whistle in the victory over the All Blacks in Dublin last November.

Australia’s Angus Gardner will officiate Ireland’s second pool fixture against hosts Japan before another familiar face - France’s Jérôme Garcès - is in charge for the third clash against Russia.

Ireland’s final pool game - against Samoa on October 12th - will be officiated by Australia’s Nic Berry.

Meanwhile Nigel Owens, who refereed the 2015 Rugby World Cup final, will get the 2019 tournament underway when he takes charge of the opening game between Japan and Russia in Tokyo on September 20th.

World Rugby unveiled the officials for the pool stage of the 44-day tournament on Friday, with all 12 referees allocated at least three pool matches.

Welshman Owens, widely regarded as the best referee in the game, will be appearing in his fourth World Cup and will also take the whistle for Italy v Canada and England v Argentina.

England’s Wayne Barnes is also officiating for the fourth time, while South Africa’s Jaco Peyper is on course to take charge of his 50th international - Japan v Samoa on October 5th.

Luke Pearce, Mathieu Raynal, Ben O’Keeffe, Nic Berry and Angus Gardner are making their Rugby World Cup debuts as part of a team of 23 officials for the 48 matches, culminating in the final on November 2nd.

Champions League draw: Manchester United handed tough draw on return 17:27
Leo Cullen: ‘It feels like it all came crashing down on top of us’ 15:41
Genoa’s Serie A match postponed over Covid-19 outbreak 15:25
Everton striker Dominic Calvert-Lewin among new names in England squad 14:36
2017 winner Ostapenko returning to form in French Open 14:15
Crossword Get access to over 6,000 interactive crosswords