Joey Carbery ticking off the boxes as he gathers momentum 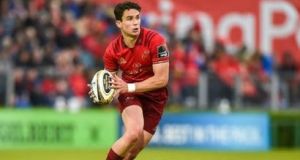 Joey Carbery: “If you see something, have a go for it, and obviously if it doesn’t work out it’s your responsibility. But there’s never ever really a boundary put on you.” Photograph: Getty Images

Injured in the latter part of the season, Carbery closed with a hamstring that has recently healed and has him back on the paddock, strong enough to allow him to train normally again. A first box is ticked.

The Munster outhalf will have Stephen Larkham coming in to assist the province over the summer. A breathlessly unstructured outhalf in his days with Australia, Carbery marvelled at Larkham as a boy.

Mike Catt, an African-born England centre, also joins up with Andy Farrell after the World Cup as different non-Irish influences come into the system in this the last summer before great change.

But within Irish coach Joe Schmidt’s World Cup orbit the same hustles continue. Carbery is rooming with Jordan Larmour in their base at Carton House. The summer for him, for both, is an open book. Don’t press Carbery too hard about the position the IRFU expressly sent him to Munster to play. But fullback? Yes, sure, why not.

“I’d be happy to do that, yeah,” says Carbery. “Like I’ve always kind of said, when I was playing fullback I love being on the pitch and I love playing, and I feel like fullback is a real open position, and you can certainly benefit from being a 10 playing fullback because you can kind of get a feel for the game. So if I was called upon, I’d be more than happy to slot in.

“We kind of pride ourselves on everyone knowing each other’s role so in a certain system or formation we should know where everyone else should be. I think even if I didn’t get too much time at 15 I’d still have an idea of what to do, but you would need a certain amount of time before slotting in.”

Rob Kearney aside, so would Jacob Stockdale, Robbie Henshaw and his current roommate feel that fullback is within their skill set. It is Schmidt’s way to place his players into a number of comfort zones but always draw the line between comfort and complacent. There’s a little bit of Larkham that adds to Carbery comfort.

“He’s a special player and it’s funny how he started playing 15 when he was younger and then moved into 10,” he says. “So it’s kinda cool to see how he did that, and it will be great to chat to him about it.”

There is a pecking order. Carbery knows his place. Coming from the number one pick in Munster at 10 into an environment where Sexton is top dog has its own familiar challenges. He knows he plays differently, and when he plays at 10 enjoys a licence to play what he sees. It is also on him if he buys the licence and things don’t work out.

“I feel pretty comfortable. I’ve never gone into a game feeling nervous or thinking that I’m not able to do it, so I’d be very comfortable in the situation. If you see something, have a go for it and obviously if it doesn’t work out it’s your responsibility. But there’s never ever really a boundary put on you.”

The squad have been together a couple of weeks working largely on fitness and team-building. There are a few new faces like uncapped Jean Kleyn and Mike Haley. Leinster outhalf Ross Byrne has been capped twice, as has Connacht’s Jack Carty, with Munster’s Rory Scannell just three times.

Some have been to Japan before on the summer tour two seasons ago. But again they will be briefed on the culture, the humidity, the norms of behaviour and basic courtesies before the final squad departs.

“We know how humid and hot it’s going to be,” says Carbery. “Two summers ago when it was the tour of the USA and Japan, we kind of got briefed about their way of life, being polite and stuff like that. We’ll definitely be briefed and taught a few Japanese words as well, which is cool, a bit of culture.”

There is a sense that is enough for now at the beginning of a protracted summer and autumn. Pleased because his body is fine, and for now that’s momentum. “You have to look after your body. It’s your everything really.”