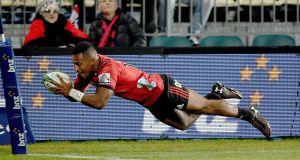 Crusaders’ Sevu Reece scores a try against Hurricanes in the Super Rugby semi-final last Saturday. He is one of the four uncapped players included in the All Blacks squad. Photograph: Marty Melville/AFP/Getty

All Blacks coach Steve Hansen named four uncapped players in an extended 39-man squad for the Rugby Championship on Tuesday as he looks to finalise his World Cup selections over the next six weeks.

Outside backs Braydon Ennor and Sevu Reece, outhalf Josh Ioane and loose forward Luke Jacobson are all uncapped while hooker Asafo Aumua and prop Atu Moli have both played one non-Test match for the side.

One-Test scrumhalf Brad Weber was also recalled after his strong performances in Super Rugby kept Te Toiroa Tahuriorangi, who was in Hansen’s squad last year behind Aaron Smith and TJ Perenara, on the bench at the Waikato Chiefs.

“It’s really exciting bringing the team together and we’re all looking forward to starting the work towards this year’s goals,” Hansen said.

“We’re going to try and do something that’s never been done before and that’s to win three Rugby World Cups in a row.

Injured Canterbury Crusaders duo Ryan Crotty and Scott Barrett were not included after they were ruled out.

Liam Squire has also ruled himself out of contention. The blindside flanker has barely played this season due to injury and Hansen said he had told him he was not ready for Test rugby.

“It’s a heck of a brave decision and good decision for him to make,” said Hansen.

The All Blacks opening fixture against Argentina in Buenos Aires is on July 20th with this year’s Championship shortened to just three matches each instead of the usual six due to the Rugby World Cup in Japan.

Few, if any, players from the Crusaders, who face the Jaguares in the Super Rugby final in Christchurch on Saturday, are expected to travel to face the Pumas.

The All Blacks will then play South Africa in Wellington on July 27th and Australia on August 10th in Perth in the Rugby Championship.

They face the Wallabies in a Bledisloe Cup clash in Auckland on August 17th and end their preparations with a match against Tonga in Hamilton on Sept 7th.

Hansen has said he would use the Rugby Championship to whittle down his playing squad to the 31 he will take to Japan.

They open their quest for a third successive World Cup title against the Springboks in Yokohama on Sept. 21.