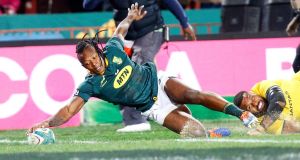 Rookie scrumhalf Herschel Jantjies scored two tries on his debut as South Africa claimed a bonus-point victory over sloppy Australia in their Rugby Championship clash at Ellis Park on Saturday.

Jantjies has been the find of the season in South African rugby, having risen from obscurity in recent months at the Stormers, and he looks to have booked a Rugby World Cup ticket as the Springboks scored further tries through lock Lood De Jager, wing S’busiso Nkosi and replacement scrumhalf Cobus Reinach.

Australia had dominated much of the first half but too many unforced errors left them trailing 14-10 at the break, only for the Boks to pull away in the second period in front of 51,206 in Johannesburg.

The visitors’ tries came via outhalf Bernard Foley and wing Dane Haylett-Petty, who also botched a second score in a horror moment with the tryline gaping.

Australia had promised a more incisive attacking game this year and there were signs of that, with some excellent handling that deserved a better final product, but the finishing touches were not yet there.

The Boks won the forward battle with their heavy pack and were particularly potent in the scrums, also showing more proficiency at the breakdown. They hit the front when number eight Francois Louw effected an excellent turnover in centre-field and electric winger Nkosi was set free and danced past one defender before feeding inside for Jantjies to score.

The Boks were reduced to 14 when centre Andre Esterhuizen received a yellow card for a high tackle, but almost immediately they scored their second try. Loose-forward Pieter-Steph du Toit’s broke away down the left wing and his chip behind the Australian defence took the Boks to within a metre of the line, where De Jager was able to burrow over.

Haylett-Petty crossed for Australia in the corner as they made their numerical advantage tell, but the wing should have had a second soon afterwards when he fluffed a magnificent opportunity. Without a defender in sight, he only had to place the ball over the line but inexplicably knocked it on as the Boks led 14-10 at half-time despite Australia seeing over 60 per cent of the possession.

South Africa dominated the opening 20 minutes of the second period and that pressure finally bore fruit when prop Taniela Tupou’s shoulder charge into Rynhardt Elstadt’s chest earned him a yellow card and Nkosi crossed in the corner as the Boks stretched the visitors’ defence.

Scrumhalf Jantjies capped an excellent debut with his second as Australia began to wilt in the Highveld air, sniping around the side of the ruck as the visitors left the smallest of gaps for him to burst through. Foley reduced the deficit to 11 points for Australia with his score, but the Boks secured the bonus-point as Reinach brushed off a defender and crossed with the last play of the game.