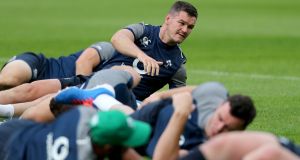 Ireland forwards coach Simon Easterby says that Joey Carbery has shaken off the effects of the hamstring injury that blighted the end of his Munster season, but that his injured rival for the Ireland number 10 shirt, Johnny Sexton, is eager to get back into action immediately.

Sexton is recovering from a strained thumb and trained on his own at yesterday’s open session at Thomond Park, while the rested Keith Earls didn’t train at all, and Tadhg Beirne, Josh van der Flier and Rory Best only took a limited part in the session.

There was some concern for Bundee Aki, who appeared to pick up a calf injury when he slipped during the warm-up, but after receiving treatment and being restricted to bike work, he took part in some light work near the end. “I don’t know, to be honest. I think he’s fine. He looked all right,” said Easterby regarding Aki.

Carbery was a full participant, though, and he looked lively throughout. According to the forwards coach, the Munster out-half is progressing very well after a fractured few months.

On the whole, everyone is working really hard and it’s a good group to be around at the moment

“He [Carbery] has been good. Obviously, with Johnny missing, it’s meant that Joey, Jack [Carty] and Ross [Byrne] will get a little bit more time in that 10 position. So he, like the others, is competing really well,” said Easterby.

“He’s a fabulous player who can play in more than one position. We’re really happy with his progress and the development he’s working on.

“Johnny sat out with his thumb and he’s a frustrated watcher, like most of the players are. There are obviously times when players need to be managed a little bit, whether they have niggles or just off the back of last season that they have to manage.

“But, on the whole, everyone is working really hard and it’s a good group to be around at the moment.”

After spending four of the last five weeks together, the Ireland squad will break for a week after their Limerick camp ends, after which time they will reconvene in their new training centre at Abbotstown for the first time. A week in Carton House is also scheduled in before their opening World Cup warm-up game against Italy on August 10th, while they will also be based in Portugal for 10 days before they take on England at Twickenham on August 24th.

The 31 players in the final squad will be announced after their final warm-up game against Wales on September 7th, and, according to Easterby, the management is still working on the puzzle of how many players to bring in each of the specialised positions such as outhalf, scrumhalf and hooker. He says players will be tested in unfamiliar positions in the warm-up games.

“That is always going to be a conundrum. Your specialist positions, your nines, your 10s, and you have to have the right amount of props and maybe look for a prop who can play both sides.

“Those things are part of that negotiating period here when we’re into games and we’re working through giving players opportunities and seeing what the best fit for us is as a squad.

“I think that has to happen because we are restricted to 31 and that means we have to adapt to circumstances.”