Laumape hoping to seize All Blacks chance against Argentina 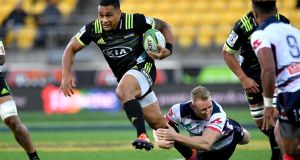 Ngani Laumape is looking to seize his Rugby World Cup chance when the All Blacks face Argentina on Saturday. Photograph: Inpho/Marty Melville

A lingering hamstring injury to Sonny Bill Williams has given Ngani Laumape what could be his only chance to show All Blacks coach Steve Hansen he should be in the Rugby World Cup squad in Japan.

The 26-year-old will start the three-times World Cup winners’ Rugby Championship opener on Saturday against the Pumas in Buenos Aires alongside Anton Lienert-Brown.

Laumape and the versatile Lienert-Brown are two of five players battling for what is expected to be just four midfield spots in Hansen’s squad for the global showpiece with Williams, Ryan Crotty and Jack Goodhue also expected to be in the mix.

The All Blacks have just five Tests - three in the abridged Rugby Championship - before the World Cup and Hansen said earlier this week that some players might only get one opportunity to press their credentials for Japan.

A lot would be riding on Saturday’s match for the specialist inside centre in the absence of Williams and the expected return of the rested Goodhue for the July 27 clash against the Springboks in Wellington.

Laumape made his debut for the All Blacks against the British and Irish Lions in 2017 but was on the fringes last year and was only brought in to cover for an injury-prone Williams.

While he is a prolific try-scorer, topping Super Rugby in 2017 with 15 and finishing second this year with 13, Hansen and his assistant Ian Foster have asked Laumape to work on his communication and develop his passing and kicking.

It was something the bullocking former rugby league player took on board and worked on his game harder than ever during the Super Rugby season, according to flyhalf Beauden Barrett.

“He’s sat down with Jason Holland at the Hurricanes and worked really hard on his attacking game and no doubt Fozzie (Foster) has helped him with the structures at the All Blacks,” Barrett told reporters in Buenos Aires this week.

“He understands his role, which is his job in the team, but also he understands how important our relationship is in getting aligned so that we almost think the same thing.

“He knows what I expect of him, and I know what he expects of me and he’s worked really hard on that.”

His work this year has also impressed Hansen, who has to decide whether he should pick the powerhouse Laumape or gambles with Williams in the midfield for Japan.

“We asked him to go away and be more dominant with his voice, particularly in aiding the No 10 in his decision making,” Hansen said in comments published by the New Zealand Herald.

“He’s been adding skills to his game and got a nice wee kicking game going at the moment.