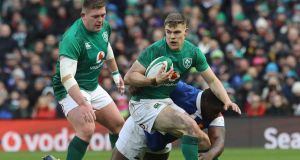 Ireland’s Tadgh Furlong and Garry Ringrose with France’s Demba Bamba in their Six Nations clash at the Aviva Stadium in March. The men’s international game now accounts for 81 per cent of all IRFU revenues. Photograph: Lorraine O’Sullivan/PA Wire

The Irish Rugby Football Union (IRFU) made a profit of almost €25 million on the back of the sale of land at Newlands Cross last year.

The site in question was once examined as a possible location for a new stadium for the IRFU and the Football Association of Ireland (FAI). Ultimately, Lansdowne Road was chosen for the project.

The IRFU was paid €27 million for the land by Hibernia Reit.

In its annual report, published on Friday, the IRFU said it received a net surplus of €24,959,748 on disposal of the land. If the land is rezoned in the next 10 years, it will be entitled to an additional payment equating to 44 per cent of the market value of the lands at that date, less what Hibernia Reit has already paid for it.

South Dublin County Council has rejected pleas from Hibernia Reit to rezone the land from agricultural use to allow residential building there, although further talks between the two parties are expected to take place soon.

The sports body saw revenues grow to more than €87.5 million for the year

The sports body saw revenues grow to more than €87.5 million for the year, an increase of €1.8 million on the previous 12 months.

Higher revenues from the Pro14 competition, which have been passed on to the provincial teams, along with the sale of additional 10-year tickets and corporate boxes at the Aviva Stadium, account for the increase.

The men’s international game now accounts for 81 per cent of all IRFU revenues through ticket sales, hospitality, sponsorship and amortised income. That is likely to be even more stark this year as the team plays in the Rugby World Cup in Japan in September.

With 15 per cent generated by Pro14 and European Professional Club Rugby, the IRFU said 96 per cent of its revenues were attributable to the men’s professional game.

It said the net revenues from the professional code were allocated across the entire game. There were increases to domestic game funding, women’s rugby, values-based initiatives through the Spirit of Rugby Programme, and the promotion of the game, “particularly on driving attendance to this year’s Women’s Six Nations games”.

IRFU chief executive Philip Browne said the organisation was concerned about the impact of Brexit, which at this stage remains “unknown”.

“With the impact of Brexit still unknown, the future for all businesses is uncertain,” he said. “We must continue to govern the game in a prudent and responsible manner and, in that respect, we must ensure that the revenues received from the Newlands sale continue to deliver an income that can be spent on our ongoing grassroots programmes.”