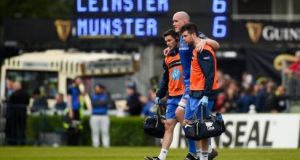 Leinster’s Devin Toner after picking up a medial ligament injury during the Guinness Pro14 semi-final against Munster at the RDS on May 18th. Photograph: Diarmuid Greene/Sportsfile via Getty Images

Rugby is back – already. On a Wednesday morning in June, Devin Toner confirmed his grade two medial ligament tear, sustained on May 18th, had all but healed.

“If there was a game I would be able to strap up and play,” said the towering Ireland lock, who added he’ll “go hell for leather” the week after next.

Conflicting aims are apparent across the verbal table tennis as said player seeks to reveal next to nothing about himself or preparations without antagonising the gaggle of interviewers. Regardless, each media outlet unearths a thematic line, packages it and feeds the public.

Also speaking at the IRFU announcement that Energia has agreed a five- year deal to become title sponsor of both men’s and women’s All-Ireland Leagues was Leinster, Ireland and most recently Barbarians centre Sene Naoupu.

We shall circle back to Toner’s comment on the recent investigations into Stan Wright and Seán O’Brien, but Naoupu took this opportunity to accentuate the benefits of leading female rugby nations – England, France, USA, Canada and New Zealand – launching the Super Series this week in San Diego, obviously without Ireland.

“We are lucky to have a Six Nations every year,” said Naoupu. “The work that we’ve been doing with the rugby ethics commission – World Rugby and the International Rugby Players – [we learned] that teams in the Southern Hemisphere were crying out for games. So, if anything, it’s great that the likes of New Zealand are playing more internationals.

“Overall, so it balances out, to have a global calendar would be key. Certainly we’d love to have more games but those teams have earned the right – the top five teams in the world are playing in America.”

Despite an abysmal Six Nations that leaves Ireland ranked 10th in the world, one place below Spain, the veteran midfielder managed to put a positive spin on this reality.

“For now we can focus on a really strong domestic competition,” she said of the expanded interprovincials that begin when Connacht visit Donnybrook (rebranded Energia Park) on August 17th.

“Once we improve performances there and get better buy-in from communities and then the likes of yourself [the media] even, when we start performing and winning games, we might earn the right to play more international fixtures.”

In the meantime national training camps will happen in and around the interpros before Ireland coach Adam Griggs names a squad for two, as yet unconfirmed, home games in November.

“What I am excited about is after all the lows we have come through there is only one way to go,” said Naoupu. “For me I’d rather be part of a team that comes back from the depths, and overcomes that, rather than a team that wins every day. I wouldn’t change a thing. We learned plenty from it. It’s going to be a massive 16 months.”

In September 2020, Ireland must win a mini-tournament against Scotland, Spain and Italy if they are to qualify for the 2021 World Cup in New Zealand.

Back to the men, rugby training for Japan 2019 is already flowing. The 44-man squad is currently in a two-week camp, followed by a week off, before the first warm-up match against Italy on August 10th.

A warm-weather week in Quinta do Lago, Portugal, at The Campus leads directly to Twickenham and the England test match on August 24th.

Asked if any formal discussions have occurred regarding a Leinster academy player being punched unconscious in a hotel and a member of the public being sprayed with urine in a pub, both incidents occurred May 26th, Toner replied: “No. No, not yet. Everyone knows what is going on. Everyone knows what standards we hold ourselves to, and what we should be able to hold ourselves to.”