Ireland under-20s forced to make changes due to injuries

Backs hoping to make significant gains against Italian side in Prato 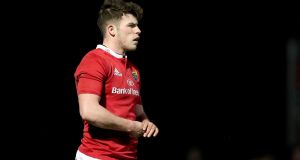 Injuries to captain Jack Kelly and tighthead prop Peter Cooper have forced head Ireland head coach into a couple of enforced changes and a positional switch, in tandem with bringing a fit again Gavin Coombes and Matthew Burke onto the bench.

Colm Hogan switches to fullback and the Trinity player is an excellent broken-field runner. Calvin Nash comes onto the wing, fresh from his Munster senior debut and should add a cutting edge.

The backs will be hoping to see a great deal more ball, front foot at that, than they did against Scotland where they lived off scraps.

The Irish side experienced a great deal of trouble in the scrum against the Scots and that’s going to be an area of concern ahead of this game.

Irishman Stephen Aboud, now in charge of the technical development of Italian underage sides amongst other briefs, will be well versed with the coaching and playing personnel of the visiting team.

Carlo Orlandi, who coaches the Italian underage team alongside former scrumhalf Alessandro Troncon, said: “We know the Ireland team well having played them several times from under-18 up. They are a team that has great individual skills, perhaps less physical than Wales. We’ll have to increase our focus on defence and try to impose our game.”

Ireland should have a little more cohesion to their unit skills and general play having 80-minutes under their belt but the performance of the pack will be crucial, especially at set piece, with outstanding number eight Caelan Doris, new captain Cillian Gallagher, Paul Boyle and Oisin Dowling hoping that the workload is divvied out more equitably on the night.