Confident Munster in the mood to slay Dragons 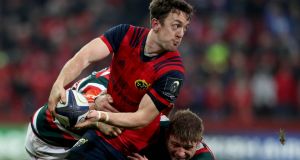 It’s apposite that Darren Sweetnam’s return from an injury sustained on St Stephen’s Day against Leinster should coincide with Munster’s return to his native Cork; albeit that the Irish province will be looking to improve on a record that has seen them win two of their last four fixtures at the old Musgrave Park.

The unfortunate timing of Sweetnam’s injury denied him a place in the extended Ireland squad and the opportunity to push strongly based on form for a spot in the match-day 23. Andrew Conway did make the national training panel but a groin injury, for a player also on top of his game, was inopportune.

Both will be keen to quickly reprise the excellent form they have shown this season, while others like Rory Scannell, Dave Kilcoyne, Tommy O’Donnell and Jack O’Donoghue know that they are only an injury or two away from being involved in the Six Nations Championship.

Munster’s narrow victory over Edinburgh in their refixed match reasserted the notion that Rassie Erasmus and his coaching team have managed to reintroduce a steely core, a belligerence that was easily visible during the trophy winning times of yesteryear.

It provides a solid foundation upon which to develop the obvious talent within the squad. Munster possess a real cutting edge out wide, power and football in the midfield, and a player, in Tyler Bleyendaal, who can exploit that quality.

The joie de vivre behind the scrum is predicated on the work of the forward pack, in which Jean Kleyn in particular with his hardnosed, consistent excellence and Rhys Marshall have contributed lavishly. Munster are largely direct, strong in the set piece, and the quality of their defence under Jacques Nienaber has been particularly impressive.

Winning inspires confidence, patterns and playbooks come alive and it builds trust on and off the pitch. Munster have that momentum at a crucial stage of the season but what has been , and will be, so important is the depth that has been created within the squad.

A perfect example of this is academy openside flanker Conor Oliver, who has been superb when given a chance, and there are others like Young Munster duo Dan Goggin and Calvin Nash, who boast a similar quality.

The Dragons have made wholesale changes from last week’s Anglo-Welsh Cup match and while they don’t face too much disruption from international commitments they are unlikely to make it a hat-trick of Welsh wins in the last five matches in Cork, following in the boot prints of the Ospreys and Cardiff Blues.