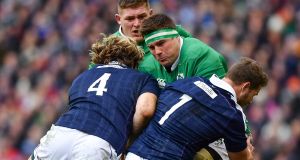 Ireland’s CJ Stander is tackled by Scotland’s Richie Gray and Allan Dell as the home side effectively focused on one-out Irish ball-carriers at Murrayfield. Photo: Ramsey Cardy/Sportsfile via Getty Images)

When I talk of centre of gravity and how oppositions will endeavour to attack same, there must be an understanding of the negative impact this has on the opposition. Scotland clearly focused on ours last Saturday with a key priority our one-out ball carriers.

The Irish lineout was also targeted where, for instance, Ireland had a slightly poorer return, 83 per cent in Soldier’s Field on their way to beating the All Blacks than in Murrayfield 85.7 per cent.

So Scotland were able to minimise the enormous Irish scrum advantage whilst also impacting Ireland’s lineout value hugely, aided somewhat by Ireland’s poor execution. That was the overriding impact of Scotland’s attack on our centre of gravity and possibly Vern Cotter’s goal in the first instance. Ireland became disjointed as the famed Joe Schmidt accuracy ebbed away making Ireland look extremely vulnerable.

Why does it take the half-time talk to right these wrongs? Is it that there is such huge faith in the coach’s master plan that only the master can change it?

Remember this master has provided Irish rugby with huge success. Are the leaders on the pitch capable of reading the evolving outcomes and altering accordingly? Are they allowed to? Is the absence of Johnny Sexton impacting this key aspect? If so is this a healthy weight for one man?

In order for Scotland to punish our big ball carriers they had to oft times triple team them. When Scotland attacked our lineout in the air they did so by getting players into the air attacking the space ahead of the target.

When Scotland challenged in the air from Irish box kicks they swarmed the landing zone. The Scottish advantage from same was clear to see but their potential disadvantage is what interests me as the opposition typically invest hugely in same.

The next option is to focus in on ebbing accuracy which is difficult if the intensity is low. This can be impacted by flooding the bench with specific orders centring on simplicity, intensity and accuracy. Think of Trevor Brennan being launched from the bench.

Alternatively a team being attacked by Scotland can counterattack; which in rugby are two separate things. The counterattack in the purest sense is a full back receiving from deep and the 14 men ahead of him combine with him to expose the kicking team’s weaknesses; this Ireland do not do. Connacht do, ditto Munster. This really, really needs to change.

However when faced with a massive threat to your centre of gravity the opposition are open to a counterattack different to above. That is if Italy triple team an Irish ball carrier as Scotland did last Saturday then Italy mathematically are vulnerable. So the question is where.

Oft times it can be right beside the ball carrier. A feature of the Irish style is how obvious that receiving player is to the defence. You can read Stander lining up to receive and Scotland adjusted to form a triple team wall to not just halt Stander but mangle him backwards. The resultant recycle is appallingly slow.

Bizarrely Ireland utilised the tip on pass in their warm-up but rarely used it in the match. Every time Stander is available; he carries. For this he deserves huge credit but a tactic should evolve to use him as a decoy in a variety of ways, ditto O’Brien and in fixing three Scottish (Italian) defenders exploit elsewhere with a simple pass or a double skip Finn Russell effort.

I’ve watched much of Italy these past few months and in reality Ireland will be vastly improved from Murrayfield and, although it will be a battle, Ireland have all the ingredients and the personnel to get the win where a bonus point is a significant target and requirement.

The bonus point? European Club rugby has been extremely comfortable with this concept for some time but it was not always thus. In the early days our coaches didn’t fully understand its value either but soon we all realised that should we score four tries to get a bonus point it was highly likely that we’d also win; thereby earning five.

The mistake we often made was to focus entirely on the four tries and fall short of scoring them and worse fall short in winning the match; zero points. We know the value Munster have gained from those bonus points gained against all the odds away in France but take a look at Pool Two of the Champions Cup. Connacht won four of their six games and Toulouse won just three but the French side go through on bonus points.

1 Connell losing touch with the club championship is the real tragedy of Normal People
2 Ghosts and goalposts: The soul of street football in Dublin’s Gloucester Diamond
3 Rugby clubs in crisis: ‘I fear a lot of players won’t go back playing at all’
4 Shane Ryan: Shark attacks and gruelling shifts on a Covid-free Atlantic mission
5 Karolina Pliskova: Male players complaining about women’s prize money are ‘super weak’
Real news has value SUBSCRIBE