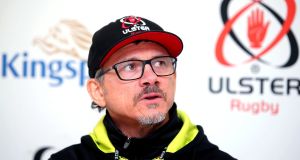 Ulster Director of Rugby Les Kiss during a press conference ahead of their Pro12 clash with Edinburgh. Photo: Inpho

Marcell Coetzee will make his highly-anticipated debut for Ulster, after recovering from a knee injury sustained last April, when they take on Edinburgh in the Pro12 on Friday.

The South African, capped 28 times at international level, will start at number 8.

Peter Nelson, who sustained a significant midfoot injury against the Scottish outfit back in December 2015, will make his first Ulster appearance in 15 months after being named to start at flyhalf.

Stuart Olding is another player making his return from injury, having not featured since the Exeter fixture in October – he will link up with Darren Cave in midfield.

Nelson will be partnered by Paul Marshall at half back, with Charles Piutau, Jacob Stockdale and Louis Ludik making up the back three.

Up front, John Andrew will make just his third senior start after being selected at hooker, where he will be joined in an all-Ballymena front row by Andy Warwick and Ricky Lutton.

Kieran Treadwell and Alan O’Connor are paired in the second row, with Robbie Diack and Chris Henry joining Coetzee in the back row.

The versatile Sean Reidy is in line to make his 50th appearance for the Province after being named among the replacements, while hooker Jonny Murphy will earn a second cap if called upon by Kiss.

Wiehahn Herbst has also recovered from injury (calf) and will provide additional forward cover from the bench, with Callum Black and Pete Browne also included.

Stuart McCloskey and Tommy Bowe have been released by the Ireland management and along with Dave Shanahan, they complete the match day squad.

Over 15,000 tickets have been sold for the match but there is still availability at www.ulsterrugby.com/buytickets. Alternatively, tickets can be purchased on the gate from 6.05pm on Friday.