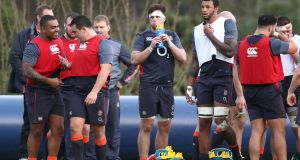 Jack Clifford and Courtney Lawes of England look on during a training session at Pennyhill Park in Bagshot, England. Photo: David Rogers/Getty Images

Jack Clifford has been named at openside flanker in England’s side to face Wales on Saturday and forms part of an inexperienced back row with only 10 international starts between them.

Clifford, whose only previous England start came against Wales last May, is selected ahead of Tom Wood, who has been unable to train fully this week due to a shoulder injury while Jack Nowell replaces Jonny May on the right wing for the trip to Cardiff.

James Haskell is again named on the bench alongside Wood but with Chris Robshaw and Billy Vunipola already sidelined through injury, it leaves Clifford, Maro Itoje – who makes only his second international back-row appearance – and Nathan Hughes comprising the back row. Wales, who name their team later on Thursday, will select three British & Irish Lions in Sam Warburton, Justin Tipuric and Taulupe Faletau if the latter is passed fit.

“Jack Clifford deserves his starting role,” said Jones. “He is a hard-working young player. He has got a good record against Wales, he had a superb game against them in May, he knows what he is going to expect from Wales and we’re looking forward to him making an impact to our back-row play. Tom Wood will also play his part later in the game off the bench as a finisher.

“We don’t need extra motivation this week; we play Test rugby because we want to be the best for England. Every game is important for us and our supporters, and Wales is our next game so it’s the most important.”

England will seek a record 16th consecutive victory on Saturday after opening their campaign with a lacklustre 19-16 win over France where the replacements, including Nowell, made a telling contribution. May was shown a yellow card in that match and makes way for his Exeter counterpart.

“Jack Nowell starts this week with Jonny May changing to a finisher,” added Jones. “Jack has an excellent work rate and he’s a guy that carries through the line which will be important for us. It’s been a great week of focused preparation and we can’t wait to play Wales.”