Cian Healy and Donnacha Ryan on the bus for Italian job

Speaking at the announcement of the Ireland side to face Italy, scrum half Conor Murray has urged his side to start positively in Rome. 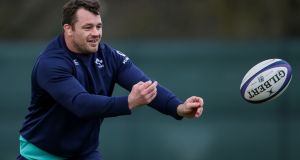 Cian Healy has come in to the Ireland team to face Italy in their second Six Nations match in Rome on Saturday. Photograph: Gary Carr/Inpho

The delayed bus to Murrayfield, caused by misguided police out-riders, remains to the forefront of the Ireland coach’s mindset. This is not the media chasing a nothing story, rather Joe Schmidt brought “the anomaly” up once again by stating it created “anxiety” among his players moments before the 27-22 defeat to Scotland.

“I think we are incredibly disappointed by the way we started last weekend,” said Schmidt. “I don’t think it was apathy. There was a bit of anxiety at not having the full period to warm-up. Players get anxious. They get very routine based. I think it is a challenge for a professional player that they can be adaptable and be able to cope in different circumstances and start well.

“We were very disappointed with how we started.”

Any concerns about Rome’s carabinieri?

“No,” Schmidt continued. “I think that was just a one off anomaly . . . I think it is good to have to deal with those distractions because they will happen at other tournaments and we have to be able to cope with that and still perform. That is a good challenge for us.”

Considering this unlooked-for narrative, Ireland scrumhalf Conor Murray was asked about the disrupted preparation that preceded Scotland leading 14-0 after 20 minutes.

“You can’t put a percentage on it but it was a little bit different to what we are used to,” said Murray. “It is another challenge as Joe said. We won’t use it as an excuse.”

And yet it has now been referenced in three separate interviews.

Bowe and Iain Henderson (slight hamstring strain) miss out on the squad entirely while Cian Healy replaces Jack McGrath in the starting XV.

That means Donnacha Ryan and Healy are the only changes from the team that started against Scotland.

So, second chances aplenty despite it being generally accepted – by Ireland players and coaches this week – that Murrayfield was the most lacklustre opening 20 minutes by an Ireland side since the 2015 World Cup quarter-final malaise against Argentina.

“Craig was with us in South Africa and has worked incredibly hard,” said Schmidt.

Gilroy’s first Six Nations call-up since 2013 means no redemption for Bowe, whose fairly disastrous cameo off the bench – a slip on his first carry and a high tackle that conceded the penalty which allowed Greig Laidlaw put Scotland back in front – appear to have proved costly. Bowe, in defence of his defence, was facing a four on two situation after tiring Irish forwards failed to provide sufficient cover (Schmidt noted as much).

Nonetheless, the 68-times capped Monaghan man returns to the Ulster bench for Edinburgh’s visit to Belfast this Friday.

Keith Earls keeps the 14 jersey as Andrew Trimble was unable to prove his fitness.

Donnacha Ryan proved that the old adage – you don’t know what you’ve got until it’s gone – remains true; the always ultra-psyched Tipperary lock returns to the starting XV having been held back in Edinburgh despite shaking off medial ligament damage in his 33-year-old knee.

The hope with Ryan’s selection is Devin Toner can direct a few Rory Best throws away from himself after Richie Gray damaged the usually reliable Ireland lineout.

“Donnacha is a pretty good lineout operator. He’s a good tactician and technician so he will add value at lineout time and we will need those things this weekend.”

Another change is Healy for McGrath. There’s some evidence that this is a form selection but the likelihood is that McGrath is being held for France after starting 12 of the previous 13 Test matches (he was rested against Canada). Healy, two years his senior and previously the clear starter for Leinster and Ireland, has shown enough signs of a return to the standard that had many calling him the best loosehead in the game until injuries waylaid his career between 2014 and 2016.

“It was something we planned to do anyway – rotate those two – one plays 30 and one plays 50 and vice versa so they both play 80 minutes over the first two weekends, and they both get a shot at starting.”