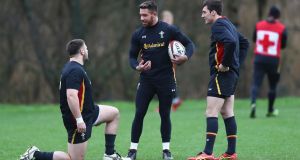 Wales have made two changes to their starting line-up for Saturday’s Six Nations clash against England in Cardiff.

Both switches are in the front-row, where props Rob Evans and Tomas Francis take over from Nicky Smith and Samson Lee, respectively.

Fly-half Dan Biggar and wing George North, who both suffered injuries during last Sunday’s 33-7 victory against Italy, make the starting XV, while Bath number eight Taulupe Faletau is among the replacements for potentially his first run-out since suffering a knee injury on Christmas Eve.

Evans and Francis bolstered Wales’ scrum when they went on as replacements at Stadio Olimpico, so their appearance in the starting XV this time around is no surprise.

Biggar, meanwhile, took a blow to his ribs in Rome and was forced off at half-time, while North suffered a leg problem early in the action, although he played on and scored a late try.

But after working hard with Wales’ medical staff this week, they will start Saturday’s Principality Stadium encounter.

“There is huge excitement in the camp ahead of Saturday for what is set to be a massive Six Nations encounter,” Howley said.

“We were really pleased with the result out in Rome, and are looking to build on that performance this weekend.

“Both Rob (Evans) and Tomas (Francis) made a big impact off the bench last weekend and deserve their opportunity to start.

“We have had a short turnaround, but Dan and George have worked hard with the medics and we are pleased to be able to name them.”

One area where Wales would appear to to possess a considerable edge is the back-row.

While England boss Eddie Jones has named a breakaway unit comprising a combined total of 20 caps, the Wales trio of Sam Warburton, Justin Tipuric and Ross Moriarty can boast 130 Test match appearances between them, with 62 more caps as bench cover with Faletau.

England, though, are on a 15-match unbeaten run and have won the last three Six Nations Tests against Wales.

1 Philip Browne admits funding model for Irish rugby is not sustainable
2 BBC to show four live Premier League games as restart set for June 17th
3 Sideline Cut: Vignette shows why Bird is the true shark in The Last Dance
4 Coming fourth in the Olympics didn’t change this fearless quartet, time did
5 Dave Hannigan: Trump gets the clubs back out as death toll keeps rising
Real news has value SUBSCRIBE