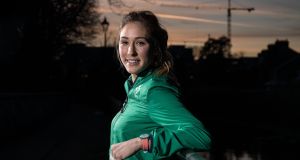 Eimear Considine: “This is a chance to be the best you can be and play with the best.” Photograph: Dan Sheridan/Inpho

Seriously, Eimear Considine has only played 3½ games of rugby. Those 40 minutes at a slippery Broadwood stadium outside Glasgow last Friday night was her first Ireland cap. The other three came on the Munster wing during last year’s interpros.

“I haven’t even played in club games with UL Bohs yet,” said the Clare footballer. “I was just thrown straight into it. It’s great but . . .”

It’s great but the GAA’s constant leakage is pouring into the IRFU Sevens programme. The Ireland women’s Sevens coach Stan McDowell, a European Cup winner with Ulster in 1999, heard about Considine and reached out via Linkedin. She almost glossed over the message.

Truth be told, until she read it, Considine had no interest in rugby, with the Grand Slam success in 2013 hardly a welcoming advertisement.

“I was watching that in the kitchen with my mam and she said something about rugby, and I said, ‘God, I’d never play rugby’. I remember it so well. In Italy they were celebrating but they were covered in mud and it wasn’t in any way appealing to me that day.

There is clear reasoning behind the mass migration of female footballers and camogie players to rugby. Women, like this 25-year-old former high jumper and pentathlete, want to stretch their talent to the absolute limits, and international sport provides the ultimate challenge.

“If you are from Dublin or Cork [women’s GAA] you probably have a professional set-up,” Considine explains. “I come from Clare. We try really hard, but we don’t have the money or the facilities or the people to be at the level that is almost professional like the Dublin and Cork girls are. The Mayo girls are getting there.

“There is a draw in there that you are important in sport. Coming from Clare, like, you are kind of at the bottom when it comes to sport because, one, you are a female and, two, you are from Clare, not Cork – where you have won numerous All-Irelands – or Dublin, where you are there or thereabouts.

“This is a chance to be the best you can be and play with the best.

“Like, people were asking if I was nervous [coming on against Scotland] but you train in the mud and winter days and cold and do gym session early in the morning for days like that, so you can perform, so what’s the point in being nervous?”

This adequately explains the IRFU’s ability to entice so many young women from Gaelic games.

“You know yourself, [the GAA] is like a religion at home; there is nothing else to do, so you are really focused on football and camogie.

“Mam really wanted me to go back playing football with Clare when they were in the All-Ireland last year. My sister [Ailish] was playing and she wanted so much for me to go back, but I had to pick one or the other. I did two [sports] for long enough, with camogie and football, while travelling from Dublin to Clare.

“The Sevens just took over my life.”

Ireland coach Tom Tierney has spent the past year trying to unearth fresh talent as he strives to present a competitive team at the World Cup on home soil in August. November saw a string of defeats to England, Canada and New Zealand, while last Friday’s 22-15 victory over Scotland was only secured via an injury-time try by Jenny Murphy.

And Considine, who works as a PE and Irish teacher at St Mary’s in Glasnevin, was considering a return to her natural faith.

“I intended to go back playing football with Clare this year. I’d gone to a few training sessions, but then I got the call from Tom . . . and sure automatically I was going to drop everything.”